The EPCOT Mexico Pavilion is the first pavilion you reach when you enter the World Showcase to the left of the big silver ball, or on the Test Track side of EPCOT. It is also the most beautiful of the pavilions (and that’s saying something) in the World Showcase.

A Beautiful Bird in Mexico 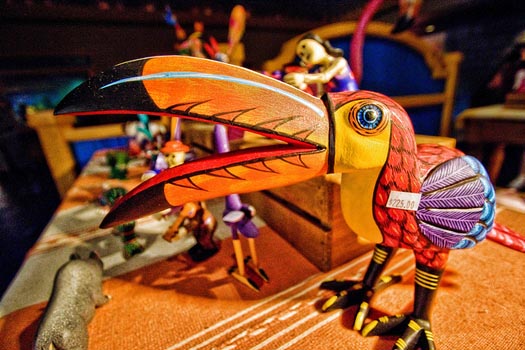 Attractions in EPCOT Mexico starts with a boat ride through the country of Mexico with some happy birds for tour guides. You’ll also find a Kidcot station.

There is one ride in the EPCOT Mexico Pavilion. It’s Gran Fiesta Tour Starring the Three Caballeros. It one of the top rides in all of the World Showcase. (Yeah, I know, there are only two rides, but it sounds good.)

Join Donald Duck and friends as they take you on a musical journey through some of the most beautiful scenes in Mexico. Some of the sites include Acapulco, Chichen Itza, Manzinillo, and Mexico City. The colors and sites and the accompanying music bring to life the culture, history and art of Mexico.

Several years ago, Donald and his friends were added to the ride to spice things up a bit. The old video is quite dated, but you do get to see some of Mexico’s finest locations.

(The Three Caballeros was a 1944 film that included several Latin stars. It was part of a good will package for South America. It was edited and reissued in 1977 as Never a Dull Moment.)

It is a nice relaxing boat ride with a very vibrant ending. Take a spin. It’s always cool inside.

Lets face it. For the little ones most of the World Showcase is flat BORING. What kid wants to learn about other countries on their vacation? So, knowing this, Disney several years ago looked for ways to make visiting the countries more palatable for younger children. This is the idea behind Kidcot.

In each Kidcot area there is a Disney Cast Member from the country to assist the kids in creating a souvenir. There is just a little advertising (it’s sponsored by Sharpie) that goes on at each location.

At the Kidcot Fun Stop in the EPCOT Mexico Pavilion, children can color a Duffy (the new bear toy) and put him on a stick. Colored markers are provided.

The Fun Stop is located near Animales Fantasticos to the left as you enter the Pavilion.

There is really only one restaurant in Mexico, but it has three parts, two inside and one outside. 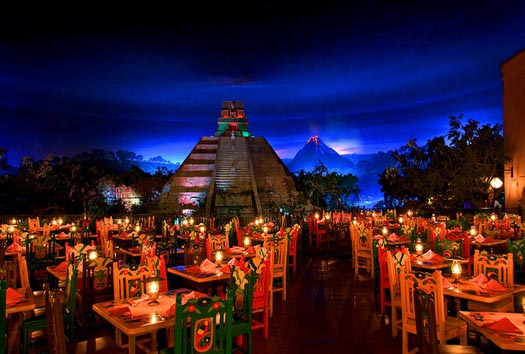 Inside the pyramid you will find the San Angel Inn. It’s a Mexican food restaurant that serves authentic dishes, and not an Americanized version. It’s based on a restaurant found in Mexico City that’s been around for almost 100 years.

There is also La Cava de Tequila (the cave of Tequila), a 30 seat restaurant tucked back inside a cave. It serves some potent drinks (over 70 types of Tequila are available) and tapas with great toppings. 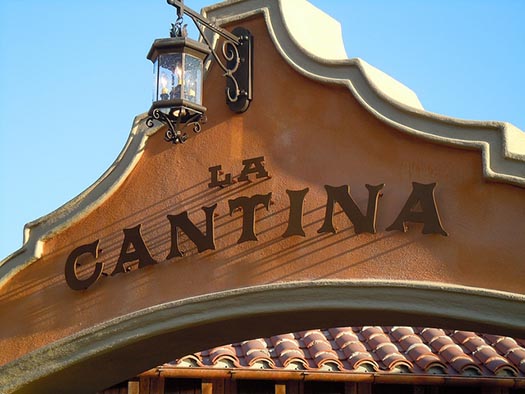 La Hacienda y La Cantina are the new restaurants in Mexico. They are located right outside the EPCOT Mexico Pavilion on the World Showcase Lagoon, this dining attraction is perfect for those looking for authentic Mexican cuisine or just something quick.

La Hacienda is the sit down portion of the restaurant. It has seating both inside and outside. La Cantina is the quick service restaurant that has to go Mexican Food with outside seating.

There is some mind blowing shopping inside the Plaza de los Amigos (that’s the name of the area inside the pyramid.) Artisans come to Disney World from Mexico just to create beautiful knickknacks for guest that visit.

You’ll find several shops and artwork as you walk toward the restaurant. Items available range from sombreros to hand carved and painted dragons. (Sorry, but no knock-off Rolex watches are available.)

Here’s what you’ll find on the Plaza –

The entertainment in the EPCOT Mexico Pavilion comes from Mariachi Cobre. More than just a small mariachi band this 12 member band entertains with classic Mexican songs. You’ll find them strolling outside (when the weather permits) and inside when it doesn’t.

This is one of the most instantly crowded parts of EPCOT. Since it’s the first in the line of countries, most people go there first. This means that the lines for Gran Fiesta Tour get long pretty quickly. 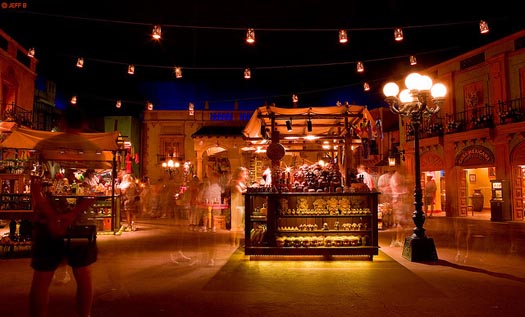 For most of the year at Walt Disney World, it’s important to have some kind of plan when you visit. It can be basic, or it can be very detailed, but you do at least need an idea of how to move through the parks or you’ll spend the whole day standing in long lines.

Dad recommends Touringplans.com for help with your plan. They have over 100 plans for just about any need. 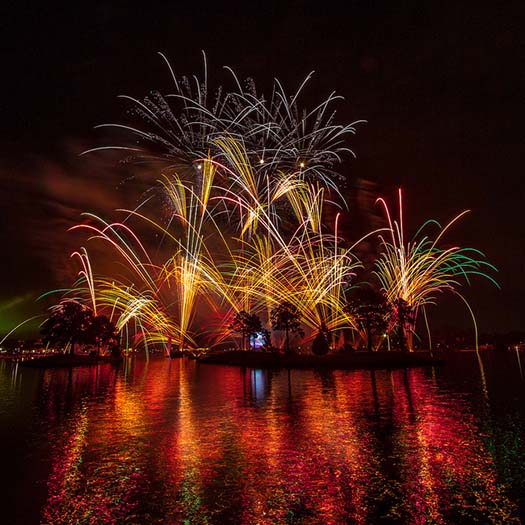 Here is an interesting tidbit –

This is first place Dad visits when he’s in the World Showcase. The ride is a little hokey and very dated. The addition of the Three Caballeros wasn’t an improvement. The inside of the pavilion is absolutely stunning and is not to be missed.