“Last time we were in Disney World, we got up early to enjoy the Extra Magic Hours in the morning because we were staying at a Disney Resort. We were VERY disappointed to be stuck in the Security Lines behind all the guest that did NOT have access to the park yet but had arrived at the park early. Even after getting through the security lines we had to weave through the throngs of people waiting for the park to open for them.

We are heading down the 1st of April and need a plan of action to avoid the stress and disappointment of waiting in lines and not enjoying the park early. HELP!” 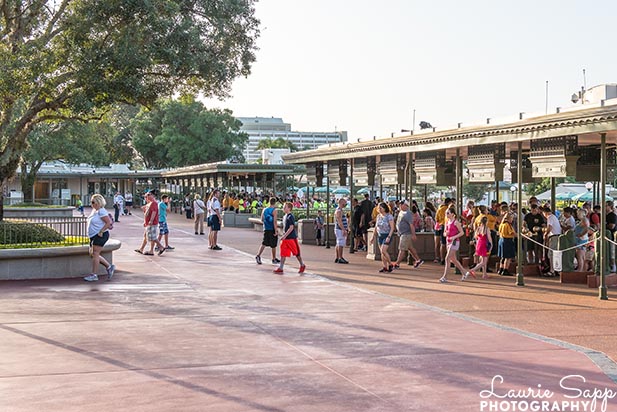 Sandy, I would love to say that there’s no need to worry. Disney has changed up security so you can get through. And that’s somewhat true. Disney is always tweaking security procedures. The Magic Kingdom security has been totally revamped and I don’t think you’ll have any trouble there.

We’ve did early Extra Magic Hours at all the parks on our last trip and I didn’t notice any problems or bottlenecks.

What I would say is the earlier you get there the less problem you’ll see. If Extra Magic Hours starts at 8, if you’re there at 7:30 you won’t have to fight as many people as if you arrive at 8:30.

Sandy, the early bird gets the worm but sometimes he has to work for it. There are more worms available the earlier you are. The earlier you arrive at the parks the less chance you’ll have of getting into those pesky crowds.