Fantasmic! is a nighttime spectacular at Disney Hollywood Studios. It features characters, fireworks, pyrotechnics, projections and more – and it’s one of the top attractions in the park. You can find it in the Hollywood Hills Amphitheatre at the end of Sunset Boulevard, near Tower of Terror and Beauty and the Beast – Live on Stage.

This is the most imaginative of the Disney World fireworks show. It’s based on some of the vignettes in the Disney animated classic, Fantasia. Mickey Mouse is the star of this show and he directs a symphony of music, lights, characters, water and especially fireworks. Along the way, lots of his friends (and enemies!) stop by. 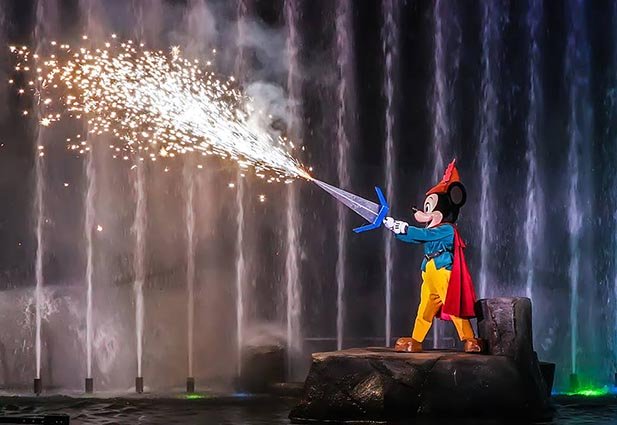 Fantasmic! is shown in the Hollywood Hills Amphitheater which is located on Sunset Boulevard. The theater seats around 7,500 with additional standing room only of 2,000 or so. The line starts forming more than an hour before the scheduled show.

Inside the theater, the best seats (front right and center) are reserved for those guests that have a dinner package. You can also opt for a dessert package in order to get guaranteed seating, or book the show through FastPass+.

If you’re planning to stand by for this show and hope to get in, opt for the later show on nights with two shows, and arrive at least 90 mins before show time to queue up. 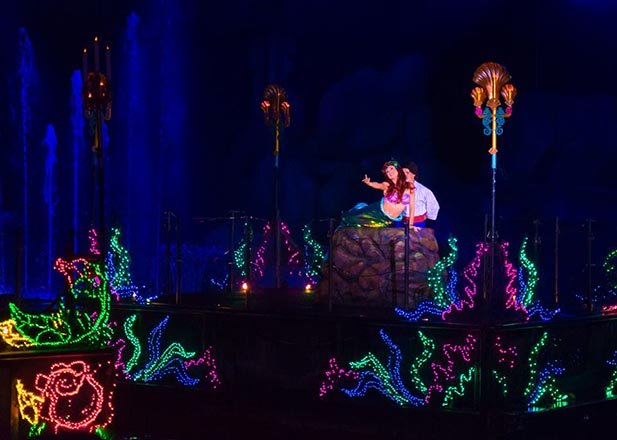 There isn’t any preshow here, apart from a little music. Sometimes the crowd will do things like the Wave or other crowd games. It can be fun just to watch the people filter in and fight for seats. You can also consider heading to the top of the amphitheatre to get a snack or a glowing souvenir while you wait – but make sure someone in your party stays to hold the seats! 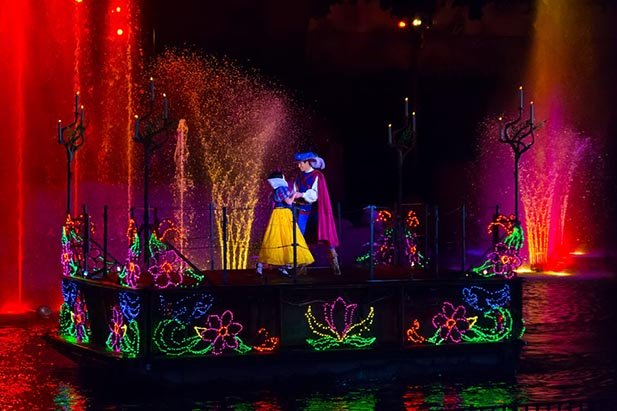 Reserved seating is available to those guests that reserve the Dinner Package. To reserve a Dinner Package you choose from one of three restaurants –

After you eat (and pay) at the restaurant you will be issued pass to get in at the special Dinner Package gate. (You need to arrive 30 minutes prior to show time.)

All the information about the package and pricing can be found here. Or, if you prefer there is a dessrt party option with reserved seats – details are here.

Is the reserved seating worth it? Mmmm? You get to sit in prime seats. You get a reserved seat without waiting an hour in line. So Dad’s answer is, if you are can get a Fantasmic! dinner package or dessert package, do it! (And if you can’t, try to get a FastPass+ for the show.)

A question about the Dinner Package and the Disney Dining Plan 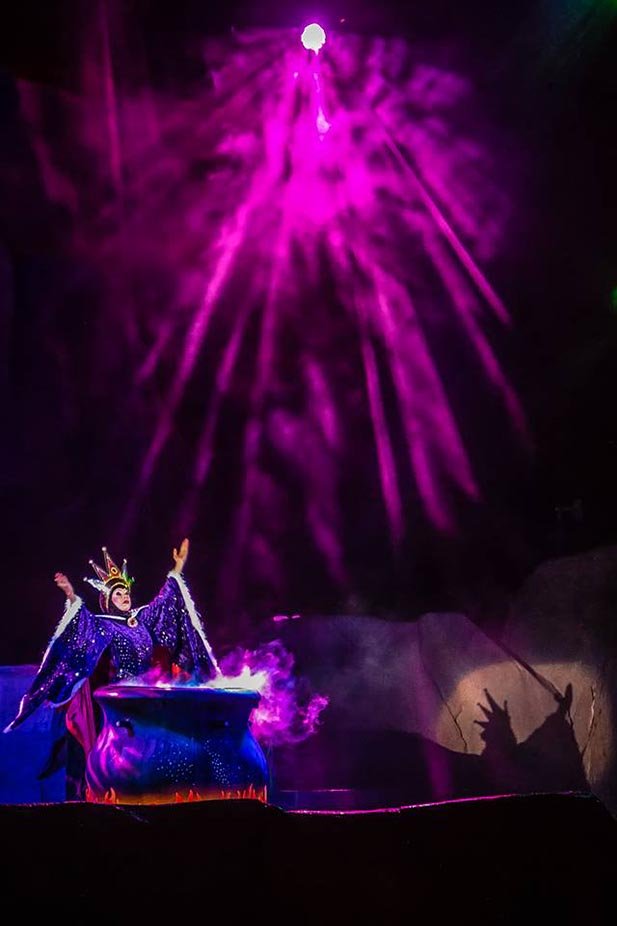 Here is the show in a nutshell:

The narrator talks, the lights dim, Mickey comes out and starts a water fountain symphony. A bunch of Disney movies and characters are shown on water screens.

The lights go out, a canon fires and a battle ensues between Governor John Ratcliffe and his men and Native American. John Smith climbs up the mountain and Pocahontas appears. The water reappears and dancing scenes from several movies are shown.

The music turns dark and the villains from almost all of the classic Disney movies arrive. Maleficent turns into a 40 foot tall fire-breathing dragon and sets the water ablaze. Mickey pulls out the sword from the stone and slays the dragon.

Fireworks begin popping all around. Favorite characters show up in a big steamboat. Some more explosions happen. Mickey keeps disappearing and reappearing in a cloud of smoke and light. The lights come up and the show is over.

Some imagination, huh? I promise, it sounds crazy but it’s a great show.

Glow with the Show

In 2013 Disney introduced “Glow with the Show” products. It’s a way that guests can interact with the nighttime shows in the parks. Guest can now purchase special Glow with the Show” hats, wands, and more that blink different colors in tune with the music and themes of the show.

Video from the show

Here’s some video from the show withg the Glow With the Show Mickey Ears.

Fantasmic! made the long trek from Disneyland to Walt Disney World in October of 1998. The original show in Disneyland started in 1992, and in 2011 it was added to Tokyo DisneySea.

Fantasmic! has a lot of fans. Many Disney Hollywood Studios guests think it’s the best of the 3 firework presentations. The drawbacks are, it’s shown in a small area (compared to Wishes, and Illuminations), and even though it’s shown every night the lines are pretty long and if you don’t get in line early you might not get in.

Even with all the drawbacks it’s a not to be missed show. 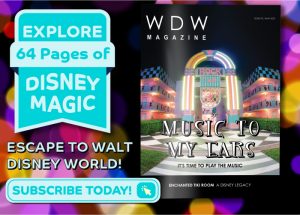