New? Yes, NEWish…Fantasyland received a makeover about 10 years ago. This makeover brought more whimsy and magic along with a few new characters to an already magical land.

Yes, some of the best, the most endearing rides Uncle Walt created were located here. From Dumbo to Peter Pan to that ride I won’t mention except to say the song never ends. Can it really get better? Well, frankly, yes it can. 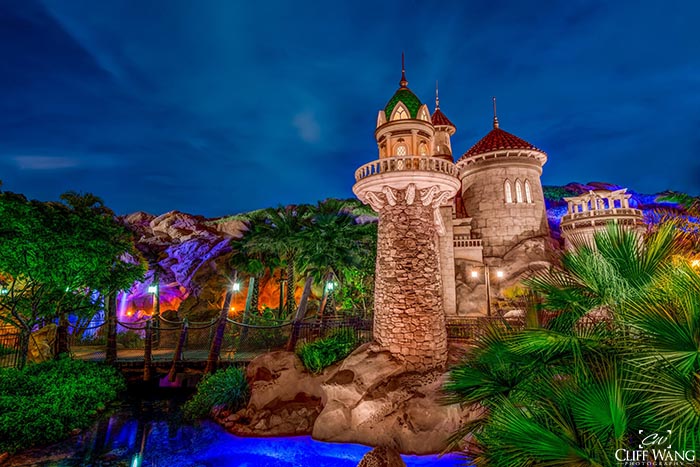 Two whole new areas are being introduced in the upgrade. (I can see a day with Fantasyland is divided into 3 complete different “lands”.) 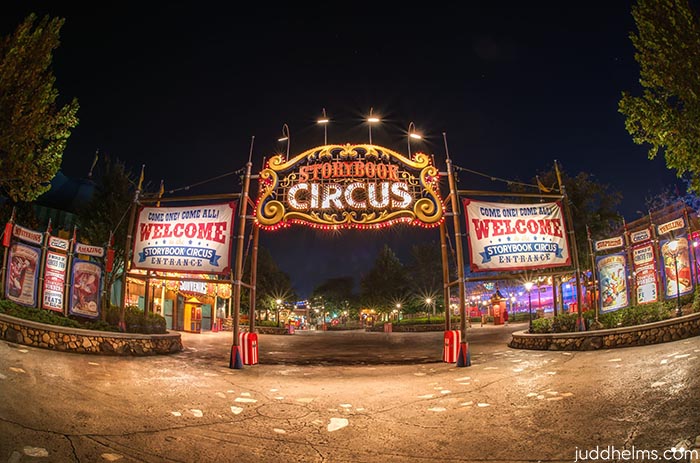 Storybook Circus is the first section of the New Fantasyland. It opened in the spring of 2012.

Storybook Circus is the circus (at least in part) from the movie Dumbo. The circus has come to Carolwood Park (Carolwood Railroad is what Uncle Walt named his backyard train set) with its big star Dumbo. The big top is all set up and ready. Ladies and Gentlemen … Boys and Girls … 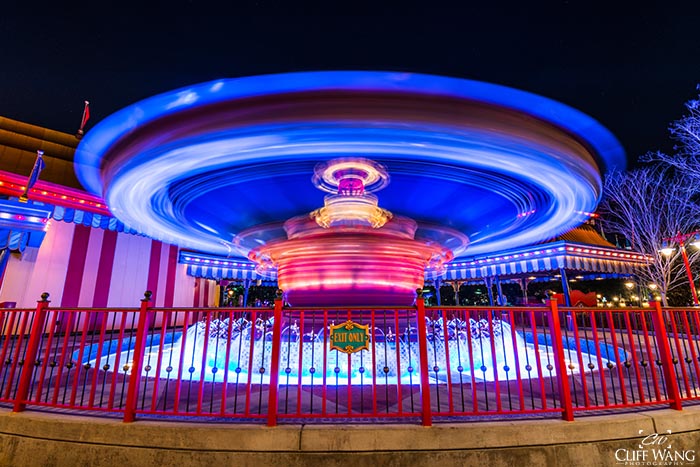 Dumbo all lit up is incredible – photo by Cliff Wang

It’s hard to believe but the Imagineers at Disney have taken Dumbo and made it better. Lots better. The all new Dumbo is twice as good as the original.

There are now two Dumbo ride vehicles plus a whole new waiting area that includes an interactive playground that kids just love. Even with the doubling, Dumbo still has long lines, but now you can get a FASTPASS. 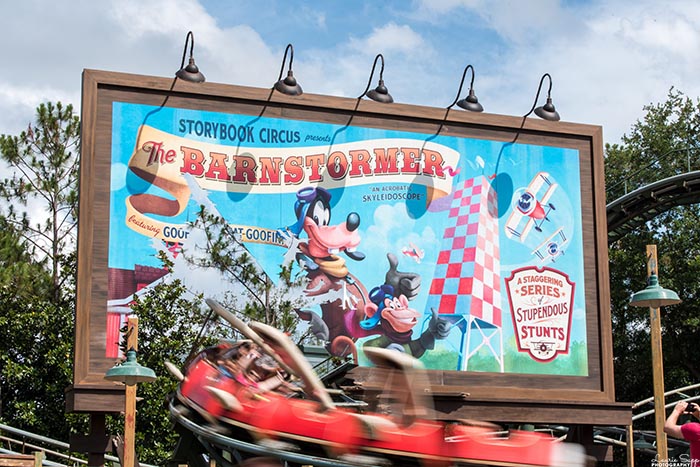 Dumbo is the star of the circus, but Goofy tries really hard.

The old Barnstormer ride has been spiffied up and is now the “B” attraction at the circus. Goofy takes you on a daredevil ride around the park. (Goofy still hasn’t learned how to fly.) 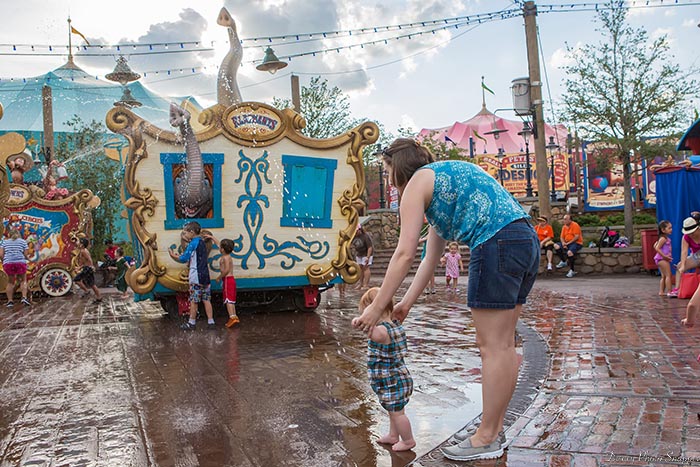 Trent loves the water at Casey’s – photo by Brett Svenson

Casey is the train that brings the circus to town. When Casey makes an appearance things get a little wet. (Yes, wet.) Casey Jr. is located in the old Donald’s Boat location and makes good use of the old drainage system to keep things tidy. (Disney likes things tidy.)

Casey shows up pulling cars with giraffe’s and elephants that like to spit on those around. Oh, yeah, even little Casey gets in the act and “blows his top”. It’s really cool on a hot day. 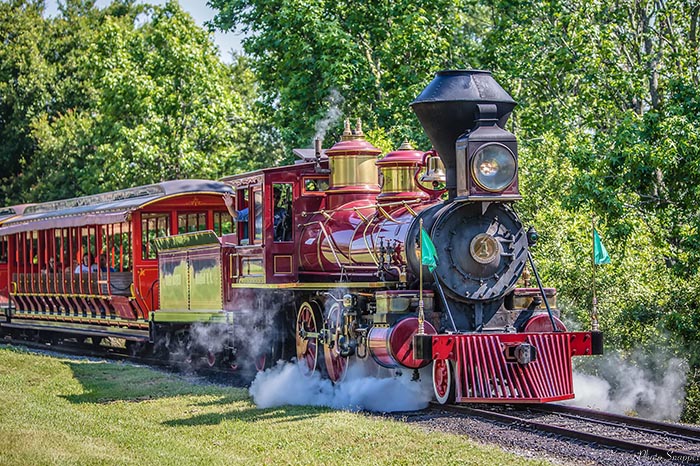 The Fantasyland Railroad Station – railroad station has even been redone to fit right in to the motif of the circus. When you step off the train, you walk right in to the story.

You have arrived at Carolwood Park. Get ready for a really big show.

You can hop on the train and go right to the front of the park. It’s a really great way to get around. All Aboard …

Storybook Circus is the first part of the upgrade and it’s just great. The new interactive queue at Dumbo is so good it might be hard to get the kiddos to go ride Dumbo.

The second part of the upgraded Fantasyland is called the Enchanted Forest. What an obvious idea having an Enchanted Forest. All the great Disney Movies have enchantment and most of them are set in the forest.

Under the Sea – Journey of the Little Mermaid 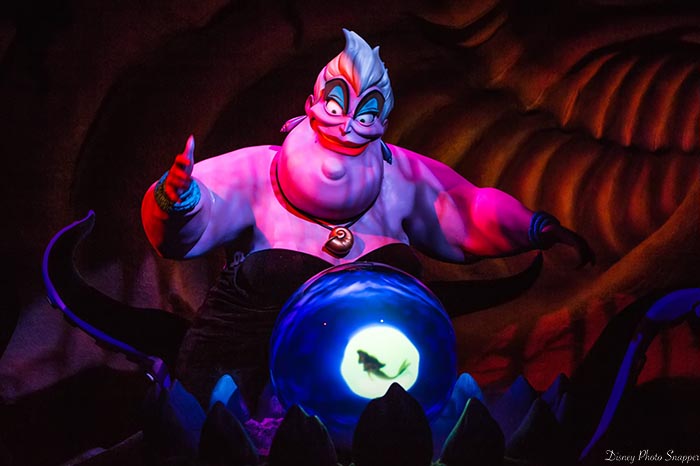 Jump in a “calmmobile” and take a ride “under the sea” and see the story of the Little Mermaid complete with the Urusala the Sea Witch, Sebastian, Eric and Ariel and some good music.

Of course good wins out in the end.

Dad’s Under the Sea – Journey of the Little Mermaid page 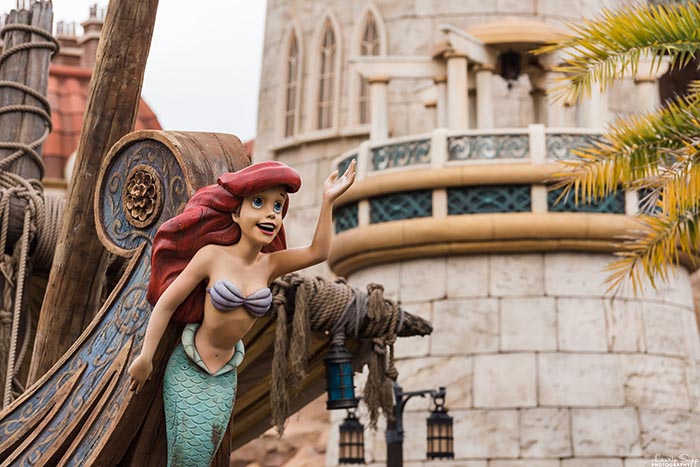 You can almost hear her singing – photo by Laurie Sapp 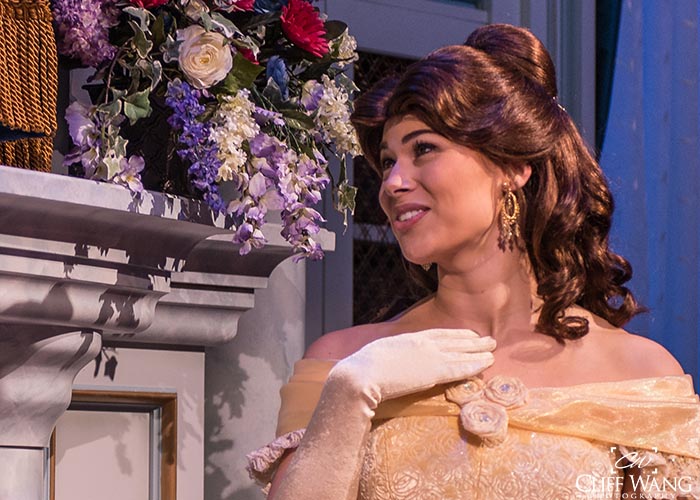 Take a walk through Belle’s house (Maurice’s Cottage) and into a magical world where guests are chosen to play parts in the story of Beauty and the Beast.

Be the Beast, Mrs. Potts and play along with the story. It’s loads of fun for everyone. 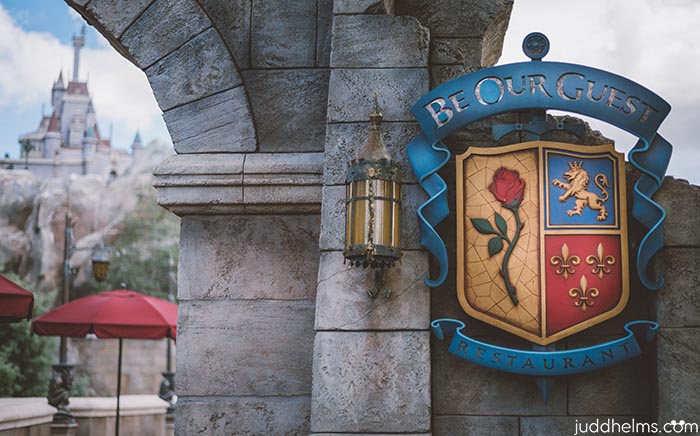 Forboding is the word that comes to mine when you look at the Beast’s Castle. Then you come to the entrance to Be Our Guest, it’s even scarier. But when you walk in you see the most beautiful restaurant in Walt Disney World.

Be Our Guest is fashioned after the Beast’s Castle in the movie. You’ll be astonished how beautiful and detailed it is.

Be Our Guest Restaurant 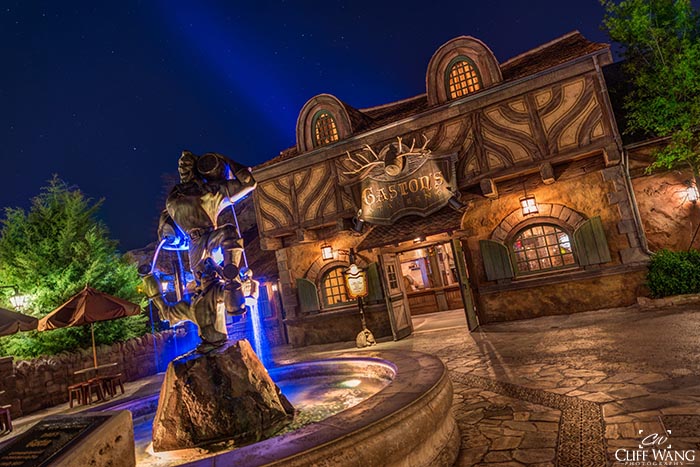 Do you remember Gaston’s Tavern from the movie “Beauty and the Beast“? The place where he sang, “no one eats like Gaston”? Now you can come get a shank and a brew and sit by the fireplace and imagine being as good looking as “the man” himself. 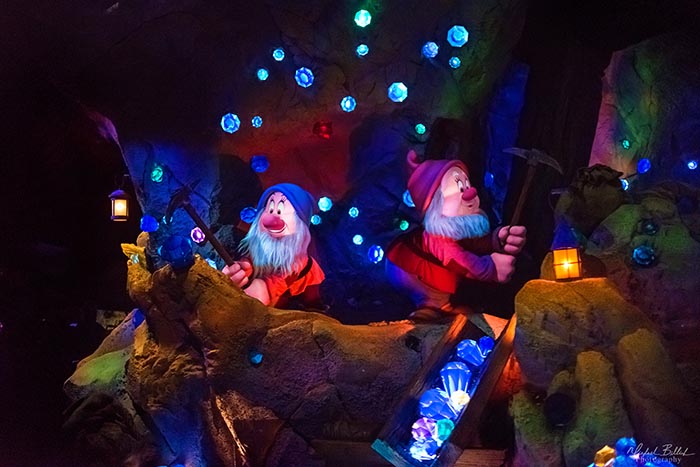 Heigh Ho! a short ride through the mine and sing along as the dwarfs find a treasure. Heigh Ho!!!!

The “old” Fantasyland attractions are something special. Most are based on some of the classic movies Uncle Walt released in the early days. Several of these were designed by Uncle Walt himself. 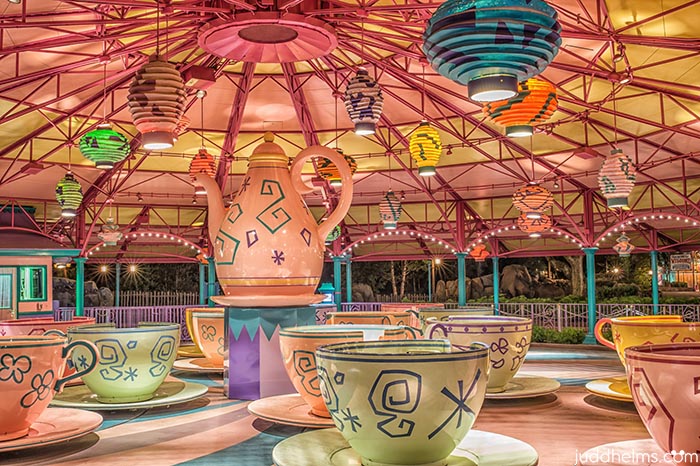 Join Alice and her friends in a grand Tea Party.

It’s called the “Mad” Tea Party because you have to be truly mad to enjoy this ride.

Hop in a giant tea cup and go spinning around. Now that’s just mad. But it is a very imaginative ride. Uncle Walt took a simple midway ride and turned it in to one of the most enduring and thrilling rides ever imagined. 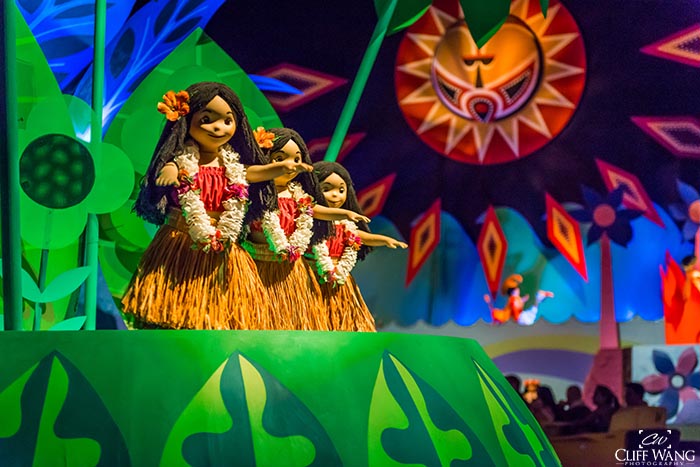 Can’t you just hear that song? – photo by Cliff Wang

Fantasyland has been home to the most annoying ride in the world. Yes, I said annoying. That song keeps running through your head. Even now, you hear it, don’t you …

Like it or hate it, you have to try it at least once. 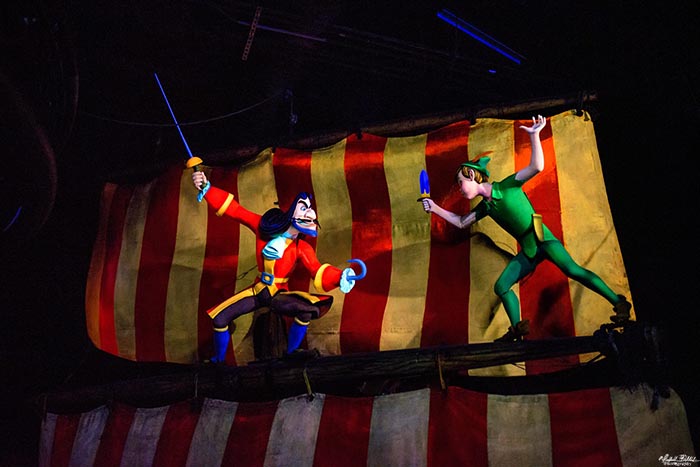 Yes, you can fly right over London and off to Neverland. Peter Pan’s Flight is one of the busiest rides in Fantasyland. In fact, it has some of the longest lines in all of the Magic Kingdom. 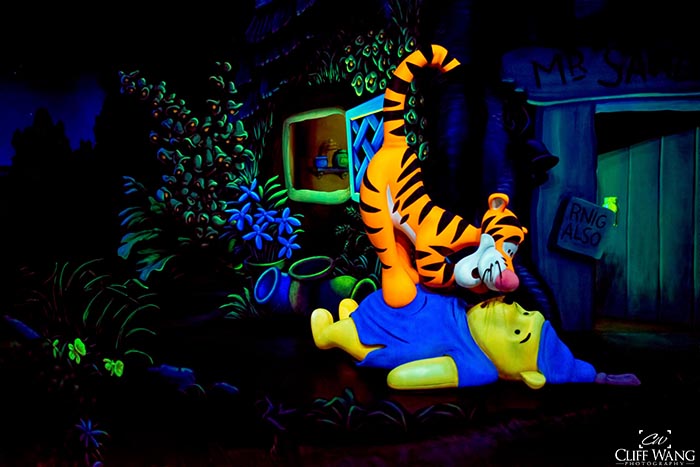 The most wonderful thing about Tiggers – photo by Cliff Wang

Take a ride through the Hundred Acre Woods in a honey pot. I’m not kidding. Ride a honey pot.

See Winnie, Kanga, Roo, Piglet, Owl, Rabbit and Gopher as you wind through the story from Christopher Robin’s perspective.

The colors are incredible. 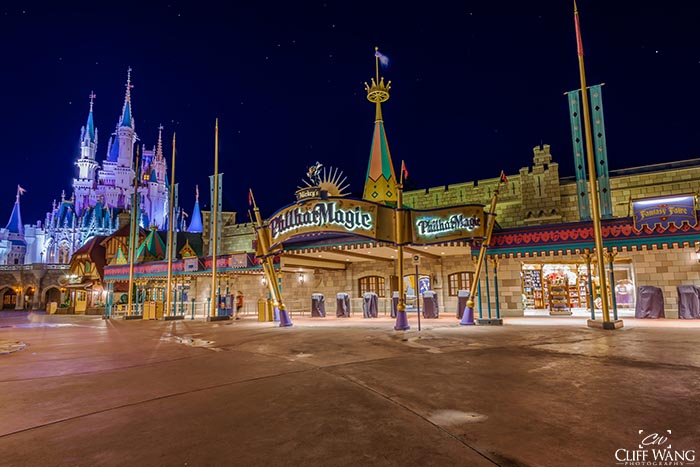 Donald conducts the orchestra, what could possible go wrong? – photo by Cliff Wang

Mickey takes a break from leading the orchestra and Donald takes over. What comes next is mayhem and great scenes from some wonderful Disney movies. Fly with Aladdin and Jasmine, roar with Simba, fly with Peter and Tink off to Neverland.

After some hair raising experiences Mickey comes back in and saves the day. You gotta see this. 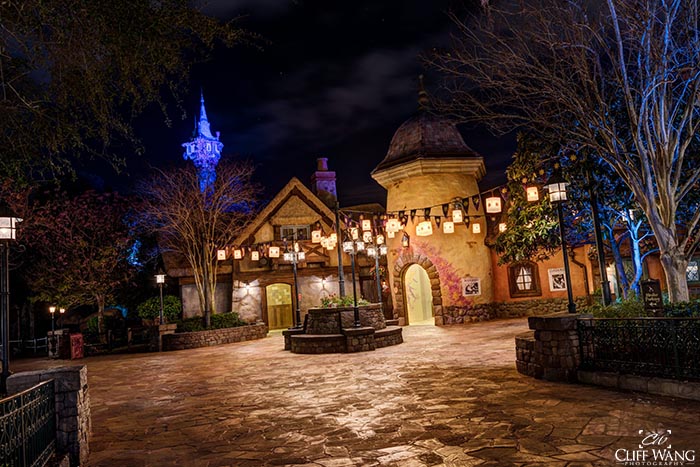 Rapunzel let down your long hair. With the popularity of the movie Tangled, Disney needed something to represent its newest Princess. The Tangled Tower has been in the work for a couple of years and now that area is opening. What’s going to be under the Tangled Tower? For now just restrooms. MMmmm? Not really sure what’s up with that.

The New Fantasyland is outstanding. The new and upgraded attractions are just pretty neat. The “old” attractions are still classic and timeless. Now if the rest of the Magic Kingdom could get a face lift like this one …