Hello! I’m headed to Disney World in June (super excited) and I’m trying to figure out how best to choose my FastPasses for DHS (Disney’s Hollywood Studios) now that Smuggler’s Run is part of the Tier system. I know I want to try and snag boarding time for Rise of the Resistance too. Sooo…how should I time out my three FastPasses (FP) assuming I will get a boarding time for Rise?

I typically choose my FP’s first thing in the AM one right after the other so I can score more as the day goes on. I’m not completely understanding the whole boarding process either. And to top it all off I know the new Mickey ride will be running too, so not sure how that will be planned in to my day. Help:) Thank you! 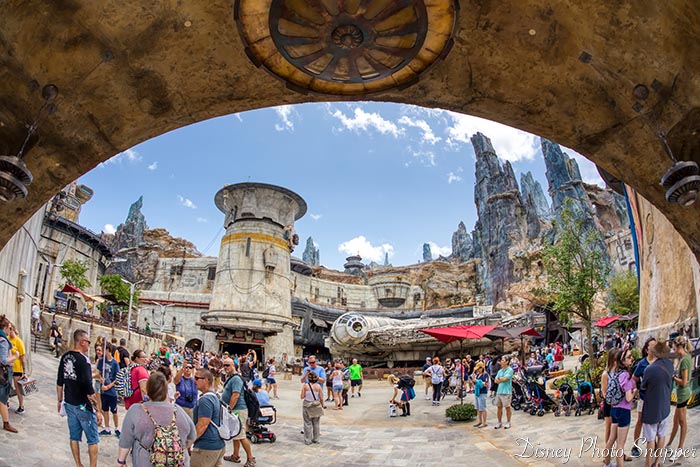 Galaxy’s Edge is AWESOME. There’s the Falcon just waiting for you to ride – photo by Brent Svenson

I’m not quite sure how to answer your question. The big reason is, as you mention Mickey and Minnie’s Runaway Railway will open on March 4th and soon after that the FastPasses rules at Hollywood Studios will probably change again. The new attractions are awesome, but it’s making FastPass management harder and harder.

Here’s what I would recommend. Although I’m not a big fan of morning FastPasses. That’s the best time to ride rides. You can get more rides in before noon than the rest of the day because crowds typically don’t arrive until around noon. Mornings are prime riding time.

That being said, with Millennium Falcon: Smuggler’s Run and Mickey and Minnie’s Runaway Railway added to the FastPass list, there should be some really good FP’s available in the afternoon and evenings.

I would NOT worry about when my Boarding Group is for Rise of the Resistance. You can’t predict it. It could be 8 am or 8 pm (or not at all). There’s just no predicting.

Here’s how the Boarding Groups for Rise of the Resistance works.

Even if you get a morning boarding group and you have all your FastPasses set up in the morning you can make it work with the hour long arrival times for regular FP’s. It will all work out.

Kristie, until we know for sure where Mickey and Minnie’s Runaway Railway fits in the FastPasses for Disney’s Hollywood Studios you won’t know for sure what Fastpasses to get, but now that Tower of Terror and Rock ‘n’ Roller Coaster are Tier 2’s, FastPass is a lot more useful at DHS. The Boarding Groups are pretty cool once you figure them out. They save a bunch of standing in line.

I hope this helps.