Finding Nemo – The Musical takes a very popular movie Finding Nemo and turns it into a musical. What a concept. Disney is the leader in live action theme park shows and this is no exception.

The “Theater in the Wild” has been transformed from the home of the wild and crazy “Tarzan Rocks” which was a high-energy roller skating show. The outdoor theater became an indoor theater and is now home to one of the most innovative live action shows on the planet. 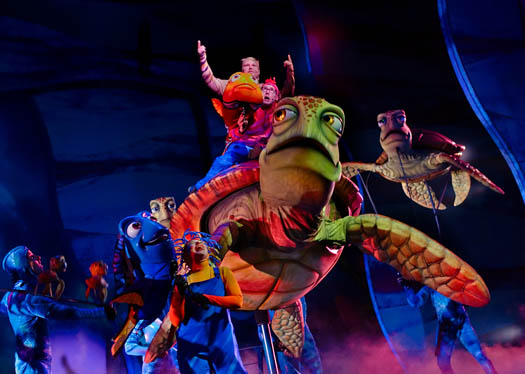 This is one of the most popular shows in all of Disney World. You MUST line up 45 minutes prior to show time to make sure you’ll get a seat. Disney does a good job of estimating crowds and cutting the line off when the theater will be full.

Disney has great preshows, but not here. You wait in line. Outside. In the heat. Or the rain. Or the cold. There is some shade in the afternoon, but no covering from rain.

Once you enter the theater you’ll see some bubbles that have undersea looking video running on them. Keep your eyes on those bubbles. Every few minutes Nemo makes an appearance in one of them. The younger set loves seeing the little fish. 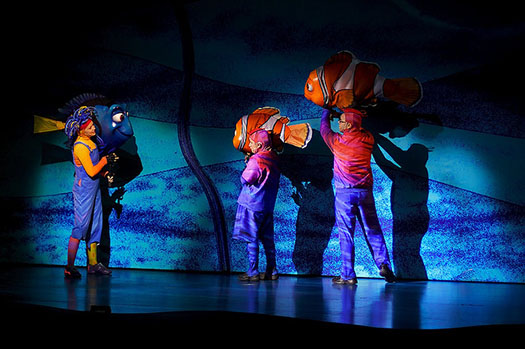 Finding Nemo – The Musical is one of the most unique creations Disney has ever come up with. Instead of Audio-Animatronic creatures, you see live puppeteers who perform the voices of each of the characters while the make the huge puppets move.

During the show all of the characters from the movie make an appearance. There are sharks, boo, and Crush, yeah, Jellyfish, boo, and even Dory, yeah.

The postshow is the same as the preshow. You walk out of the theater and on to the next attraction.

Here’s an interview the Travel Channel did with the puppeteers from the show.

I have had two very different experiences at this show. The first time it wasn’t interesting enough to keep a sleepy Dad awake. But the second time I wasn’t as tired (it was early in the day) and I thought the show was great. I really enjoyed the music. (I’m a bit of a music buff.)

If you have children younger than teenagers, you won’t want to miss it. (Adults will probably love it too.)