“I’m planning a trip for my family for December 2019. Originally I was think the first week of December but with Thanksgiving being so late next year will that change the crowds? When will Pop Warner be next year? On our last visit we stayed Sunday-Saturday and loved it because we didn’t have to deal with the weekend crowns much.

My other worry on the first week is that flights that Sunday will be very expensive due to thanksgiving. HELP would you recommend the 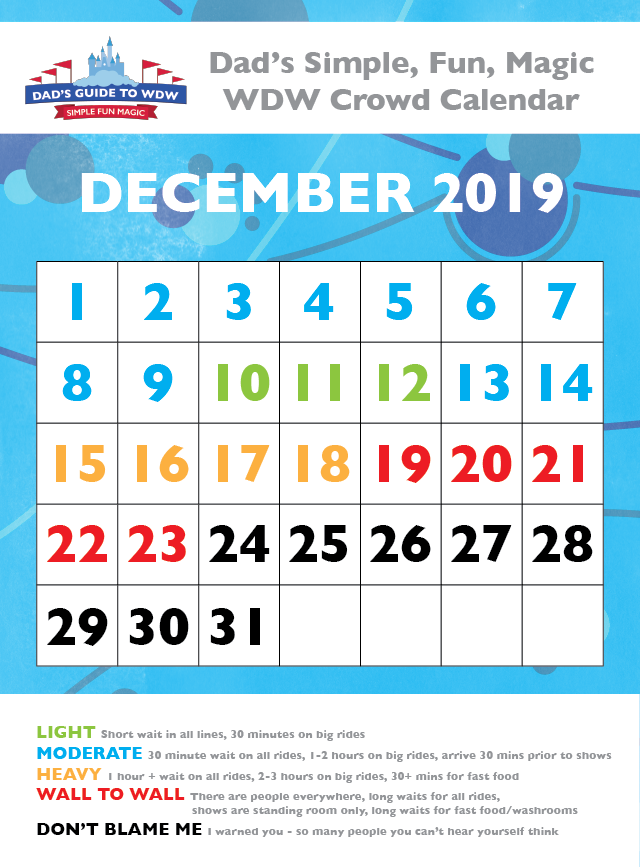 The First Week Could be Dicey

Congratulations. YOU’RE GOING TO DISNEY WORLD. And at Christmas. It doesn’t get much better than that.

So let’s talk about those two weeks in December 2019. The first week of December has been hard to predict for the last few years. It varies a lot. But I think next year it will be a moderate to heavy week for a couple of reasons.

First, I expect Star Wars: Galaxy’s Edge to open on November 22nd-ish, and that will bring extra crowds through the end of the year at least. Also, that first week of December will probably be Pop Warner week. We’re never quite sure until they announce it, but it’s usually the first full week in December.

I do think you are correct about airfare right after Thanksgiving. It will be higher at least through Monday.

Second Week Should Be Better

Unless they delay the Pop Warner Championships, the second week should be the slower of the two crowd wise. It usually is.

If I were choosing that’s the week I’d plan.

I do recommend that you go ahead and book your trip now. There’s a hotel price increase coming, my guess is in early 2019. If you book now you lock in your price.

Also, talk to my friends over at Destinations to Travel. They can help with booking your trip. All of your trip including dining reservations, FastPass+ and even itinerary help and it’s all free.

I don’t think you can go wrong with either week. Yes, the first week of December will be busier, but not crazy busy. The second week will be slower, crowd wise, but just a little. Which week the Pop Warner Championships happen would be the deciding factor.