I was wondering why the first weekend in December this year seems to have so many people showing up (See your Attendance Page for Dec.) Will there be THAT many teeny-boppers (players and cheerleaders) there that weekend? We’re planning for the week after T-Giving and into Dec 1 and 2. Should I take pains to avoid that weekend? 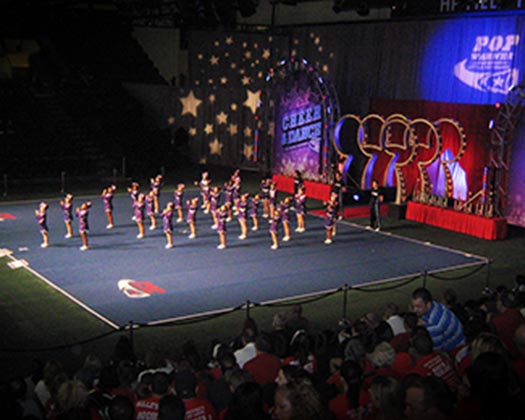 Every year the Pop Warner Super Bowl and National Cheerleading and Dance competition hits Walt Disney World in early December, and yes – the crowd levels do increase – you’re talking about thousands of young athletes, their families, coaches, chaperones… that’s a lot of people! But don’t worry, the crowds are mostly a problem at night after the day’s activities are over – and if you have a great PLAN they shouldn’t be much of a problem at all.

Like I said, the evenings are when the crowds really kick in. The kids have lots of activities keeping them busy during the days, but at night they’ll flood into the parks. Some of them are really well behaved, other are noisy, rowdy, sometimes unsupervised, and just plain annoying. But overall, they’re really not that bad.

I don’t think you need to take pains to avoid that weekend (and certainly if your option is the first weekend of December or Thanksgiving weekend, December is the way to go!). If the crowds in the parks get too overwhelming, you can always enjoy the waterparks, Downtown Disney, or some of the recreational activities Walt Disney World has to offer (biking, fishing, boating, mini golf, etc.).

The Championships aren’t the main reason Dad advises you avoid Walt Disney World the first week of December. The real reason is that you won’t get any discounts. Disney always exempts the Pop Warner week from all discounts.

Take full advantage of your time at the parks on the weekdays – make sure you get everything in that is on your must-see list so that any weekend crowds don’t result in your family missing something they’ve been looking forward to. When in doubt, check out Dad’s tips to avoid the crowds!

Better yet, if you’re serious about avoiding the crowds, the folks at Touringplans.com can give you all the help you need. Their crowd projections can help you plan your trip before you leave home, and if you follow their touring plans in the park or use their Lines app in the parks you’ll save hours in line and see more in less time!

If you want to stay in the parks in the evenings and you’re worried about the crowds, why not try something that might be of less interest to the hoards of teens? While they’re running to Space Mountain and the Twilight Zone Tower of Terror, you can soak up the magic of Christmas at Disneyworld! Seems to me like it might be the perfect time to see the Candlelight Processional.

David, don’t worry about the Pop Warner kids – just be prepared with a great PLAN for your week at Walt Disney World, and avoid the biggest crowds on the weekend evenings. Do worry a bit about the discounts you might miss.

It’s not a big crowd problem because there’s room enough for everyone at the most magical place on earth!