Flights of Wonder is the bird show at Animal Kingdom. There, page done. That’s all you need to know. OK, maybe a little more detail is needed, so let’s get started.

Several times a day in the Caravan Stage outdoor amphitheater several birds (and some other little critters) put on a show for adoring audiences. It’s really a cute little show. 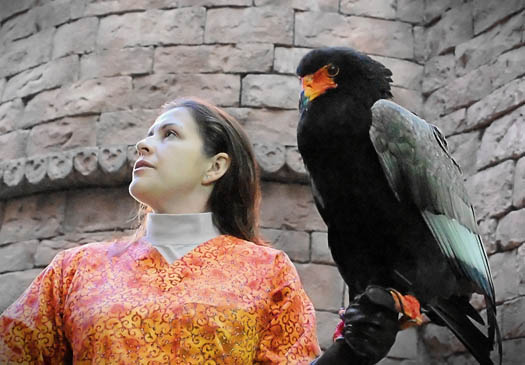 The show is presented in the Caravan Stage amphitheater which is covered, but is outdoors and there is no air conditioning. The seating is all bench seating. The best seats are in the middle section in the front. The theater is built to look like ruins from buildings found in the HImalayan region of Asia. (Which figures since the show is located in Asia.)

See birds, big and small as they perform not quite amazing feats with some almost mystical characteristics. There is a big emphasis on conservation during the show, but the birds are the stars.

The show includes a silly bit by a “tour group leader”. Guana Joe, complete with a tour flag, comes barging into the middle of the show and becomes the center of attention. It’s cute and adds some levity to the show. Joe and a bird handler show several birds. Some of the birds fly around. Some of them sing. Some of them just look scary (like the owl). Mostly you see the birds do things they would do in the wild (except maybe stealing the dollar bill thing).

There are a couple of nice patriotic moments, like when the bald eagle appears. Another humorous element is the introduction of some 4 footed critters that haunt Guana Bob as they scurry through the remains of the stage.

Here’s a video showing one of the birds singing. I don’t think he’ll be the next American Idol, but, it’s pretty impressive.