You want a Tigger hat?” I asked The Man-Child.” It looks pretty silly on a 6’3″ kid” (and most 15 year old kids are pretty image conscious, but not The Man-Child), I told him. He didn’t care. He liked it. Sigh. It’s a good thing your Gram gave you money, because the Dad wouldn’t pay for a silly thing like that. (Unless he saw it first.) 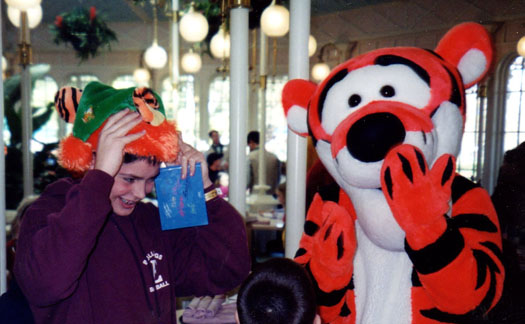 The Man Child and his Tigger hat

This was a really silly hat. It was a Santa stocking hat with Tigger ears glued on and painted with orange and black. Silly.

So off we went. All 15 of us. The Man-Child took his normal position. Out in front. And guess what. That goofy-looking (OK, maybe I should say silly) hat made it a lot easier to see The Man-Child. All of us could spot that orange thing walking down the street.

All you have to do is have a 6 foot 3 inch, 15 year-old that doesn’t care how silly he looks. Surely everyone has one of those.

The Man-Child loved that hat so much he wore it to bed. Silly kid. I wonder what ever happened to that thing?

Check out where The Man-Child bought the Tigger hat.