So I’m slightly freaking out over the filming of the Christmas Parade.

I was planning on going to Magic Kingdom and attending Mickey’s Very Merry Christmas Party on November 10th. Not only am I nervous about crowd levels for the day, but I’m also nervous about the regularly scheduled shows and parades. Will they still have the Welcoming Show in the morning? Or the Festival of Fantasy parade?

I’ve been trying to do my research and keep getting different answers. I saw that they film parts of the Christmas Parade in the morning before the park opens. I then saw that they film it all throughout the day. I literally don’t know what I’m getting myself into!

Should I try to rearrange my whole vacation? Please help Dad! 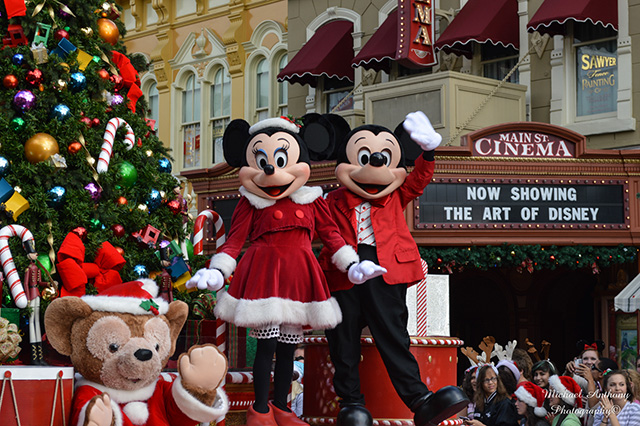 Mickey and Minnie in the Christmas parade – Photo by Mike Billick

Yes, it’s going to be alright.

Yes, the taping of the Disney Christmas Parade show can be annoying, but for the most part it doesn’t affect all that much. I can’t say for sure, but I’m pretty sure the opening show will happen like normal.

The afternoon parade will not be normal. They will be filming that so things will get all bolloxed up as they tape the parade, but the filming takes a couple of days and they might not tape the parade both days.

Mickey’s Very Merry Christmas Party will be fine. You won’t see any problems there. They will be through filming by then, so no problems.

It’s really hard to know what the effect of taping will be this year since they’ve moved it back to November, but I don’t see it being worse than in December because you don’t have any of the Pop Warner kids there.

Nichole, everything will be alright. Trust me. Relax, have fun and enjoy.