Want to see how your dreams will come true in the future? Go to Future World in Epcot. You can even see what’s gonna happen tomorrow and how it has come about.

There are some of the best rides at Walt Disney World in this part of Epcot. Mission Space may be the most technologically advanced attraction anywhere. The new technology in Turtle Talk is nothing short of amazing.

Let’s get started on our Perfect Vacation in Epcot’s 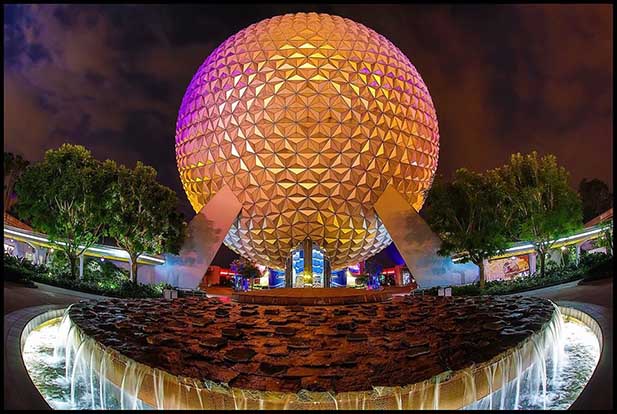 Future World is full of great attractions (and a couple of duds). This area has been the benificary of some of really helpful improvements over the last few years (The Seas, Soarin, Mission Space) with more announced (Test Track). Hopefully this trend will continue.

The Seas, with Nemo and Friends 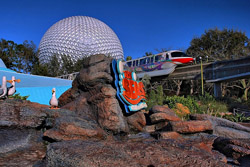 The Seas is a fascinating look at what is happening in the two-thirds of our planet that we take for granted. See divers going into the world largest aquarium and hundreds of fish doing what it is that fish do.

Since this pavilion changed from the Living Seas, to The Seas with Nemo and Friends crowds have certainly gotten bigger. Turtle Talk is really neat.

Dad’s The Seas, with Nemo and Friends page

The Land pavilion may be the place in Epcot where you will spend the most time (standing in line). The Land shows the best that our planet has to offer and talks about how we get our food and how we should take care of what nature has given us.

The Land lost one of Dad’s favorite attractions when Soarin’ was built. Soarin’ is great, but I still miss Food Rocks. (Dad’s Ode to Food Rocks)

This pavilion is due for a major overhaul. Nothing has been announced, but it’s just a matter of time.

Bringing Michael back was a temporary fix to a dying attraction I’m glad they put an end to it.. It’s time to redo this one although the purple dragon is still cute.

Innoventions is divided into two buildings, the east and the west which works if you aren’t all messed up on your directions.

Innoventions has undergone some major changes through the years. From its start as the Communicore to its modern day iteration starring gadgets for the home. You and the kids can spend some serious time playing around in this one.

The Universe of Energy is the home of Ellen’s Energy Adventure. See how fossil fuels are made. Starring Ellen Degeneres and Bill Nye, The Science Guy.

The ending movie is one of the most inspiring at Epcot and that’s saying something.

This seldom open pavilion is home to Body Wars and Cranium Command. Classic Disney attractions. Lately Disney has been using this area for group activities but not opening the rides. It’s a real shame. The attractions were something special.

Take a ride to Mars. This ride is the total package. A centrifuge creates up to 4 g’s of pressure. It’s very intense and not for the faint of heart.

This may be the most intense rides anywhere. The Green Line is Perfect for those of us who suffer from any kind of motion problems. (Dad now goes in the Green Line.)

GM shows how cars are tested through fire, ice, shaking, braking and more. Take a ride, almost everyone comes back.

The big silver ball in the middle of the entrance. See how our communications has changed through the years.

Spaceship Earth is one of the busiest rides at Epcot. Why? Because everyone has to walk right by it.

Here are the some of the details you need to know to create a Perfect day in Epcot. From where to eat, to how to avoid the crowds, Dad’s got it all.

Most of the dining in Epcot is across the lagoon over in the World Showcase, but there are a few places where hou can get a bite or a full meal.

Future World has some of the most interesting Table Service restaurants in all of Walt Disney World. There is the Coral Reef Restaurant in The Seas with Nemo and Friends where you can sit and watch the fish in the big tank swim by. You can also get a preview of the Living with the Land ride at the Garden Grill Restaurant which is a Character meal starring Chip and Dale.

For a quick bite check out Sunshine Seasons Food Court in the Land pavilion or the Electric Umbrella in the Innoventions East plaza.

One of the largest shops in Walt Disney World is located in Innoventions. It’s called Mouse Gear where you can find just about anything Disney your little heart desires. We stop here every time we visit.

Some of the pavilions (like Test Track, the Seas and Journey to Imagination) have shops in them. If you like Coke (yes the soft drink) products, you’ll love the Club Cool gift shop. It’s located in Innoventions West.

Just outside Spaceship Earth there is a very convenient camera store where you can not only get your PhotoPass photos, but you can get most camera equipment and accessories.

There may only be two of them, but they are not to be missed. The fountains are amazing and you’ll hear the Jammitors before you see them.

(Dad answers a question about entertainment in both Future World and World Showcase.)

Believe it or not there is more to Epcot than Future World. The World Showcase is a wonderful place to see the world in just one day (it took Jules Verne 180 days). In the World Showcase you can see history come to life, you can see beautiful sites from exotic places and you can eat some of the best food in the world.

Epcot is a special theme park and Future World is a big part of that. You can see the technology we could only dream about a few years ago and see how it will impact your life in the very near future.