Star Wars: A Galactic Spectacular combines to of favorite things. Star Wars and fireworks. May the Force be with you and let the show begin! 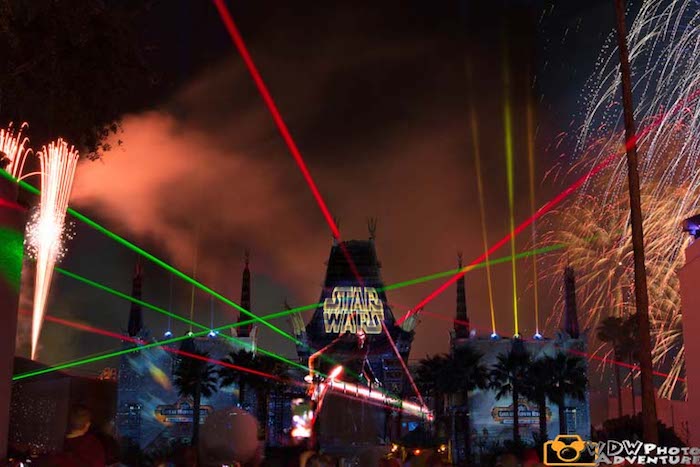 This is one cool fireworks show! Photo by Wayne Wood

There’s no pre-show here, the show is the show! This one is best viewed from a bit further back – aim to get a spot halfway down Hollywood Boulevard.

This 14 minute show has a lot more than fireworks. There are lasers, projections, and even a live appearance from a Storm Trooper or two. There’s no real storyline, but you’ll see clips from ALL of the movies in the Star Wars franchise – original, prequel, and new films included. Some are represented more than others, and there’s that fantasic John Willams score to tie it all together. This is a MUST for any Star Wars fan (like Dad).

Keeping up with the new films means that the show varies from time to time as things are dropped, added, and re-arranged.

Here is a video of the show:

A previous version of the show, Symphony in the Stars, was used at Star Wars themed special events for years before this became the nightly show in 2016.

What could possibly be better than Star Wars fireworks? I dunno. All I know is I’m going to be looking for a front row seat to Star Wars: A Galactic Spectacular every time I’m at Disney’s Hollywood Studios.

Come and join me.