Help. Two days at Disney World. Decisions, decisions. I will be traveling to Walt Disney World with my husband and a five year old boy and a 21 month old girl on March fourth through seventh. We will be staying at the Caribbean Beach Resort.

Since we won’t arrive until mid-afternoon on day one, we plan just to enjoy the resort and rest up for the next day. We only have two full days base tickets. My dilemma is whether to go to the Magic Kingdom both days or the Magic Kingdom one day and the Animal Kingdom the next. This will be our first time ever visiting Walt Disney World so I’m nervous about planning.

As for now, for Magic Kingdom day we have ADRs at Be Our Guest at 9:10AM and Crystal Palace at 4:40PM. I know we want to hit the most popular rides and see the 3PM parade and fireworks. Do you think we can get it all done in one day without the kids having a total meltdown?

The following day I plan to go to the Animal Kingdom. We plan to do the safari ride that morning and do an ADR at Tuskers at 10:50AM. I am just worried that we won’t get a full day’s worth out of Animal Kingdom and regret, if I could talk, I just talk for a living, and regret that we rushed through Magic Kingdom and didn’t spent two days there. My five year old loves rides and I know that Animal Kingdom doesn’t offer many but the baby loves animals. I’m so confused. Any advice or guidance is greatly appreciated.

It was signed confused mom.

First, I got to say relax. It’s going to be okay. You’re going to Disney World!!!! 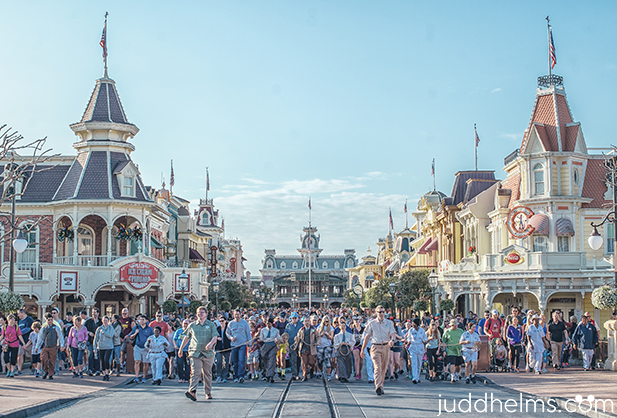 On your marks… – Photo by Judd Helms

Go get you a cup of coffee, whatever you drink to relax. Curl up in your easy chair. Take a deep breath. It’s going to be okay.

Magic Kingdom, Animal Kingdom, one day, two days, really does it matter that much? You’re going to have a great time.

Magic Kingdom, just go. Yes. You’re not going to see everything in one day. If you happen to hit a day where there are no crowds and you’re ready to zoom around the park and not stop, smell the roses, enjoy the day, yes. You can see everything in one day but why do you need to? Do what you want to do. Write down what are your priorities at the Magic Kingdom and then see if you can work it into one day.

Do you really need to take the kids to Space Mountain? They’re neither one going to be able to ride. That’s a lot of time that you can cut out because you don’t have to go to Space Mountain. Big Thunder Mountain. The five year old might be big enough to ride those two rides but are those important to him? Are those things he’s going to enjoy? Splash Mountain.

Your daughter is not going to be able to go on any of those. Are those important to you? That’s what you need to do.

Two days in the Magic Kingdom, even if you have to go back and repeat some rides that second day, wow, that’s terrible.

Here’s an idea. Have your five year old help you. Get him in there and ask him what he wants to do. Ask him what he thinks his sister would want to do. Get him involved in helping plan her day. What do we have to do to make her happy? Do we need to go see the animals? Would she really enjoy going to see the safari? Will she really enjoy going to see the walkthrough, the gorillas and the fishes and the tigers. Get him involved. Make him part of that planning process.

Not only will it help him, but it will bond them too and it will help him understand when you don’t go back to the Magic Kingdom that second day that this is why we’re not because it’s her. We’re giving her a day but there’s a lot to do in Animal Kingdom.

You just need to make a list, check it twice, and pick which one is important to you. It’s about priorities.