As Scott has already mentioned over on Dad’s wonderful Facebook page (you should check it out) inside Disney World there is an area that is not actually owned by Disney. It’s called Bonnet Creek. Those are just part of the hotels on Disney Property not owned by Disney. Let’s take a look at the whole bunch. 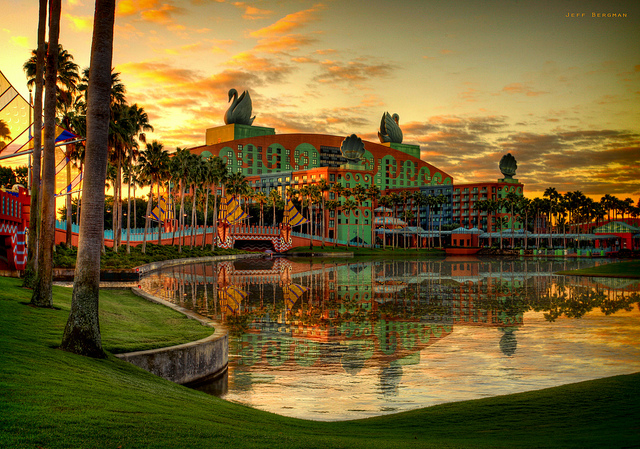 The Swan is lovely in the morning - Photo by Jeff_B.

Obviously you have to start with the Swan and Dolphin. It’s hard to miss these beautiful resorts sitting just behind the Boardwalk area. The Swan and Dolphin are highbred hotels when it comes to the hotels on Disney Property not owned by Disney. They do qualify for some of Disney’s hotel perks (Disney Transportation stops at both hotels), but not for others.

When staying at the Swan and Dolphin, you are eligible for Extra Magic Hours, free theme park parking and room package delivery. However, you can’t get Magical Express, room charging or the Disney Dining Plan. The best thing about the Swan and Dolphin is the price. The Swan is a bit more expensive than the Dolphin, but both are cheaper than the cheapest Deluxe Resort (the rooms and amenities are comparable to a Deluxe Resort). We’ll see how great of a deal these hotels are. Dad’s planning to check out the Dolphin in October.

Bonnet Creek, now there’s an interesting story. Uncle Walt and the boys purchased over 44 square miles of Orlando swamp land when they were starting Walt Disney World. There was one plot they never could get their hands on. It was owned by a guy from China. About 10 years ago this piece of land came up for sale and a developer jumped up and bought it before Disney could get it’s hands on it.

It took some wrangling by the developer to get Disney to build a road to the area, but finally, a couple of years ago the Bonnet Creek Resort area opened for business. There are 3 hotels in the Bonnet Creek area. A Hilton, a Wyndham Resort (timeshare) and a Waldorf Astoria.

Get reviews of each –

The Downtown Disney Hotels used to be part of the whole Disney experience. They were sold by Disney, they were marketed as partners in Walt Disney World. That fell by the wayside years ago. Some of the hotels even fell into disrepair. These weren’t the flagship resorts Disney had imagined on the doorstep to Magic and the relationship changed.

It seems that the Downtown Disney hotels are making a comeback. Some have new ownership, most have been recently remodeled and they create an interesting option for families looking to save some money on accommodations.

Here are some reviews from TripAdvisor of the Downtown Disney Hotels

If you’re looking to save some money, you might the Downtown Disney Hotels. These are technically inside the resort, but the really have been pushed aside through the years. The Hilton is just across the street from Downtown Disney and is probably the most convenient non-Disney Hotel outside of the Swan and Dolphin.

I’m not sure that I would recommend any of these hotels. I haven’t stayed in them. Of course the Waldorf Astoria is a very high end hotel and if you like that kind of thing it might be the place for you. Even Dad’s gonna give one of them a try.