Dad I thank you for your pages, we have gone from never seeing Disney in Jan 2011 to the point where we now are planning our fourth trip in Sept 2012. We have tried all the dining plans and have seen most of the resorts (can be the best part of the trip sometimes).

Now on to the question in September when we go it is a big week for us as there is a birthday and an anniversary within the seven days, my wife is a huge Muppets fan and also loves seeing the princesses. What would you suggest to make this a “magical” anniversary? 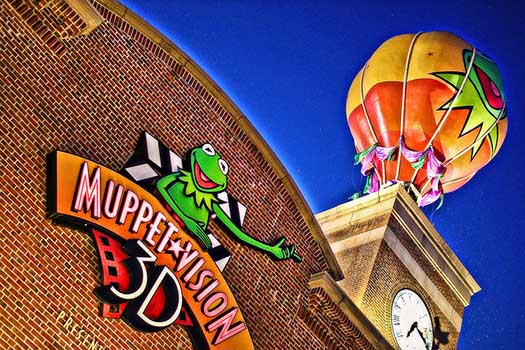 It’s time to play the music Photo by Samantha Decker

Dad’s Love is in the Air Answer

You’ve certainly come to the right place. When it comes to planning for romance at Walt Disney World, Dad really knows his stuff (Dad and Mrs Mom celebrated their Honeymoon there you know!). So let’s get down to planning your Most Magical Anniversary Ever!

Celebrations are always special at Disney world – starting the minute you arrive! Make sure you let the Cast Member at your resort check-in counter know that you’re celebrating special and you’ll receive these neat little buttons you can wear around the park. You’ll get lots of well-wishes just like the Princess did on her Honeymoon last year.

For a really memorable anniversary that combines the both Muppets and the Disney princesses, why not spend the day at Disney Hollywood Studios? You can laugh along with Muppet Vision 3D, travel under the sea withThe Voyage of the Little Mermaid, and be swept away by the magic of Beauty and the Beast Live On Stage.

Then, for something extra special, you can book a Fantasmic Dinner Package. You can choose to have a meal at the elegant Hollywood Brown Derby, the eclectic Mama Melrose’s Ristorante Italiano, or even the buffet at Hollywood and Vine. Plus, you’ll have the best seats in the house for the spectacular nighttime show (which features more princesses!).

There’s not much more you can do with the Muppets at Walt Disney World, but if you want to pack in more time with the Princesses, you could even start your day with a princess breakfast! If you have Park Hopper tickets, you could pop over to the Magic Kingdom to dine at Cinderella’s Royal Table, or to EPCOT’s Akershus – nothing’s better than starting out the day with a character meal!

Beyond your actual anniversary, if you’re looking for special or unique elements to add to your trip, you could consider taking a carriage ride at the Port Orleans Riverside, book a romantic meal at one of Dad’s Top Table Service experiences, or perhaps order a special chocolate or flower arrangement to be delivered to your room.

Trevor, whatever you do, you’ll have a Magical anniversary – you’ll be celebrating at Walt Disney World after all! Congratulations, and have a wonderful trip!