by Dana
(Thunder Bay, ON, Canada)

“Hi there, I have a large family (6 kids under 12) and we are driving from Canada to Orlando to visit DW in June. We are trying to do this as inexpensively as possible. I’m wondering if you have any recommendations on where to stay? We are willing to camp in a tent or rent a house if that is possible too.

Also wondering if you have any good links on how to do Disney on the cheap. OR any secrets? I know Disney land has some secret things like a restaurant that has a secret knock behind some vines or something… Thanks in advance!!!” 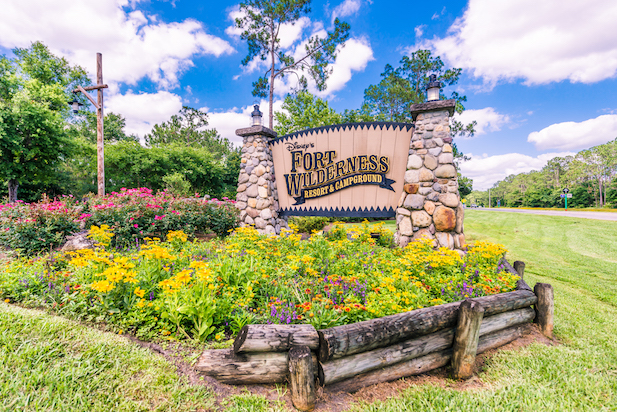 Did you know that Disney’s Fort Wilderness Resort and Campground is the cheapest place to stay at WDW?- Photo by Andy Sanchez

Dana, let me begin by saying that the first place you want to start when you’re planning a Disney vacation is with my book, Dad’s Simple Fun Magic Guide to Walt Disney World Planning. In the book, we talk about ways to save money, we talk about where to stay, we talk about how to plan your trip… all of that is in the book. The first thing you do, go grab the book.

Now, if you’re willing to camp, the Fort Wilderness Campground is pretty much the cheapest place if you can stay at WDW if you choose to book a campsite. Campsites start at $53/night during the cheapest time of year but you can expect to pay around $90 in June. Fort Wilderness Campgrounds but it is the least expensive place to stay at Walt Disney World.

If you need something cheaper than that, then you go off-site. There are some pretty cheap hotels all around Walt Disney World. Some of them are real cheap, and they’re ones you probably don’t want to stay in. Some of the chain hotels have good deals on rooms pretty close to Disney Springs on International Drive, those are safer bets.I don’t have specific recommendations on off-site hotels because it’s been 30 years or so since we stayed off-site in one of the cheap hotels. We stayed at Motel 6 one year but we typically stay on-site so I’m not familiar with the off-site hotels. But I bet my friends at Destinations to Travel can help you with some suggestions! (Don’t worry, their trip booking services are free!)

You can rent a house as another option – there are hundreds of houses around Walt Disney World for rent. They can be fairly inexpensive. You’ll have to do some checking around to see about houses near Walt Disney World. I know one of our good friends their family went to several years ago, their daughter-in-law found a house for $150 for a week – not a night $150 for a week. Now, that was a little bit unusual. No, it was a lot unusual, never seen anything like that, but if you look around you can find five, six bedroom houses for $100, $150 a night or so. You have to do some digging for that.

So those are your best options: rent a house, stay at the campgrounds, or book a value resort. I would really recommend you try to stay on-site if possible. There are many, many benefits to staying on-site. Just being on-site, just having not having to make that commute back and forth is one of the biggest benefits.

Now, about secret things… Disney World does not have any of those. The Disneyland thing you’re talking about is Club 33, you have to know how to get to Club 33. It’s kind of hidden and it’s a special club that only members can go in, so they don’t want other people trying to pop in for a look. Yes, it’s a “secret,” but it’s not really a secret because it’s not open to the public. It’s open to members only.

There are some cool things at WDW like hidden Mickey’s all around the property, fun things to look out for like a wedding ring embedded in the pavement at Haunted Mansion, or a little spot-the-Pascal game near the Tangled-themed restrooms. WDW doesn’t have any Club 33 type secrets… yet. They have been announced that Club 33 is coming to all of the parks at Walt Disney World. There’ll be a Club 33 location in each of the parks. We don’t know anything more about that yet.

I hope that helps Dana and good luck with the trip. Six kids under 12, driving from Canada, I think, that’s a 23 hour trip. Ooh, have fun! Just kidding, I really do hope you have fun and make it a great adventure.