What’s the best way to ride all the rides in Epcot the last week in September? 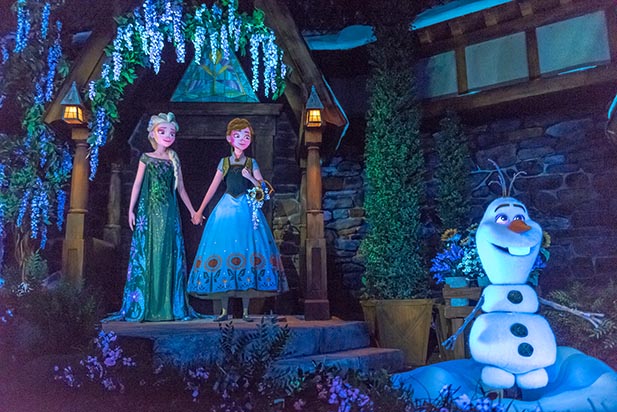 It all revolves around Frozen Ever After – Photo by Laurie Sapp

I’m going to be a little silly here – the best way to ride all the rides in Epcot in September is to show up.

Very frankly, it’s not hard to do all the rides in September. So, okay, my plan. Here’s how I would plan it. I would get a FastPass+ for Turtle Talk with Crush around noon. I’d get Frozen Ever After for 2 p.m. and Spaceship Earth late in the evening. That’s what I do.

First thing in the morning I’d ride Soarin’ then head over and then Test Track, followed by Mission Space. After that I’d go to Ellen (The Universe of Energy). It should be just about time for the FastPass for Turtle Talk with Crush so head over to The Seas with Nemo and Friends and ride the entry ride. If you have a few extra minutes to spare, you can always check out the fishies.

Next, comes the rest of the Land Pavilion and Journey to Imagination. Have some fun with Figment.

Then it’s time to head over to the Mexico Pavilion, and then you can do Frozen Ever After in the Norway Pavilion. It should be time for your Fastpass.

Now you’ve got all the rest of the day to do the different shows around The World Showcase. It’s really that easy. And that’s a pretty good plan for a typical day.

Times might be a little different because it might take you a little longer. September you’re not going to stand in line for a long time. You’re just not. There’s just not as many crowds.

It’s just that Simple. It’s really not a hard thing to get all the rides done in Epcot in September.