“My wife, four children, and I visited Magic Kingdom, Animal Kingdom, and EPCOT this past Presidents’ Day weekend. Apparently, we missed your post about it being one of the new high times.

Our family had a great time, and our kids really enjoyed it. We really had a great time despite my comments below. I guess I am just complaining, but I would also appreciate some advice. Our kids just got of age where they can actually enjoy Disney, and I think we will visit again within 9 – 18 months.

As the “vanguard” of our group, I tried to keep us in a tight single or double file line to avoid blocking others when we were traversing the park. I was regularly frustrated by other guests. We literally, physically ran into many on smartphones not watching where they were going. Sometimes by able looking people blazing around on ECV’s cutting us off at high speed. More than once by tweens sitting four across on steps required to access our next stop. Frequently by other family groups that chose to have a pow-wow in the middle of a walkway.

One sore point was groups more than 50 people in total all clad in similar gear just blocking entire walking paths.

The highlights were encountering courteous people of all nationalities and having great conversations with them as able. We got to introduce our children to wonderful people who all enjoy what we do.

I try to take the good over the bad, but I wish there was more thought given guiding peoples’ behaviors in these busy times.”

People need to be more courteous 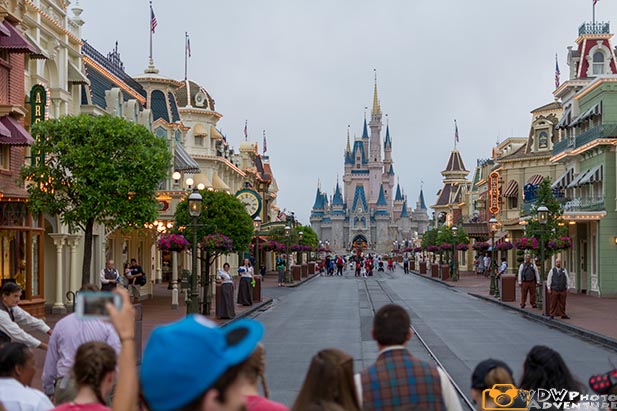 Rope drop, the calm before the storm – Photo by Wayne Wood

First time Disney Dad, I’m glad you had a great time. You’re right, Presidents Day week has become one of the top 10 busiest weeks of the year.

And I do understand your frustration. This is something I’ve talked about over and over and over. I’ve talked about the dad on the phone while the kids are kind of looking at him and saying, “Hey dad.” The people that walk into the middle of the Magic Kingdom, right into the middle of Main Street, pull out the map and say, “Where’s Expedition Everest?”

Smart phones, they’re great, but they’re one of the worst things ever invented cause people get their nose buried in my phone. Disney has made it kind of hard not to. The My Disney Experience app is great but awful. There’s maps, reservations, FastPass+, even the nearest bathroom are all on the app and we are all on our phones trying to look things up.

I don’t know why people stop right in the middle of the walkway. Why do they get on steps right where you’ve got to go walk to get into buildings? (This is not just something that happens at Disney. We see this all over.) It’s just rude.

How to avoid rude people

The one thing you can do to avoid the rude people is go when it’s not as busy. I know that’s difficult with school-age kids. Go in September when its less busy. You won’t have that problem as much in September. There’s just not anybody there. You just try to find the less busier weeks.

So the bottom line is, yes, rudeness at Walt Disney World a problem. I have no clue how to solve it other than to try and avoid it by going when they’re aren’t any crowds.

Have you ever encountered this? How did you handle it? Tell us below in the comments.