“Hey, Dad. We’re planning to go to Walt Disney World January 17th and 26th. We won’t be at the parks every day, but we’re staying onsite. I have viewed the crowd calendars for that time and for the most part it looks like crowds will be low. I was wondering if you could give me some experience or some idea as to what low crowd levels are characterized as. Are the majority of lines less than ten minutes? Also, with low crowd levels, do you think it will be easier or harder to get reservations? Thanks in advance.” 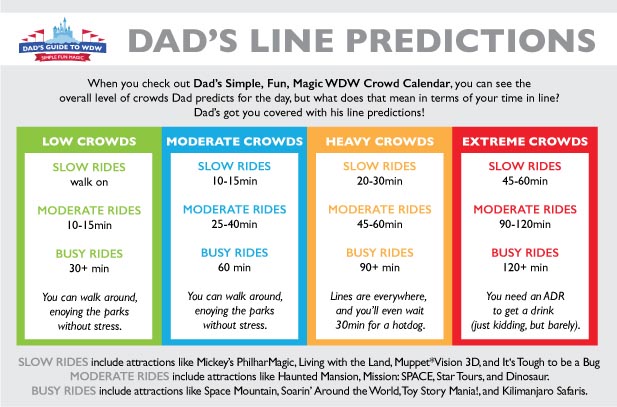 During moderate crowd periods, slow rides will be 10-15 minute lines. The moderate rides, 25-40 minutes. Busy rides, 60 or so minutes. You’ll start to see some lines at restaurants. You go to Casey’s Corner, you might have to wait. Lines might be three or four people deep, two or three people deep.

Now, the extreme crowd times … The Christmas week and maybe President’s Day week. Not so much in the summer anymore. Maybe some time during Spring Break, the extreme crowd slow rides are going to be 45-60 minutes minimum. Moderate rides 90-120 minutes. The busy rides, just forget it. They’ll be 240 minutes or more. It’ll be crazy. 120-240 minutes. It’d just be crazy.

I hope that helps. I hope that lines out what the crowd levels really mean.