Is it advisable to get a FASTPASS for many rides? Or will they over lap in time?

To be more clear. It seems like I could plan the rides all based on Fast Passes? 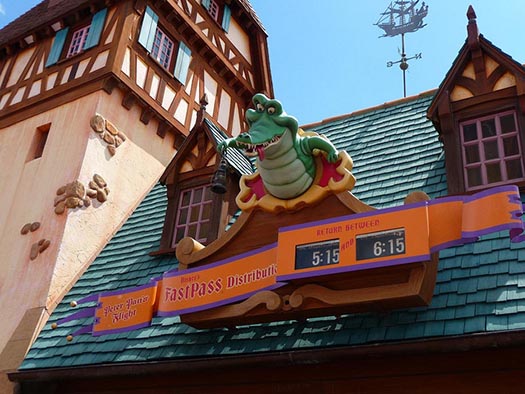 What a great question. Disney’s FASTPASS program is really hard to understand sometimes. It sounds like you can just stock up on passes and spend your day running from ride to ride without any lines. Now that would really be something. (You can do that over at Universal.)

But alas, that’s not exactly how FASTPASS works. (At least not yet.)

Currently, you can only get a FASTPASS (FP) 2 hours after you get a pass or whenever your return time comes, whichever is first. So, let’s say, you are in Disney Hollywood Studios and run to Toy Story Mania and get a FP. (By the way, this should be your first stop every time you are at Disney Hollywood Studios.) The return time on the pass will probably be sometime in the afternoon, but the time you can get another pass (it will be printed on the ticket) will probably be 2 hours in the future or if you’re lucky and get a quick return time it will be the return time.

There is one exception to this. It’s Dumbo and The Barnstormer. You can get passes for both of these rides at the same time.

Also, most rides don’t have FASTPASS capability. Only a few in each park do. For the complete list and to see how to best use them, check out …

Disney is testing a new system that will allow you to schedule your FASTPASSES in advance. You’ll print them out at home and bring them to the park. (Or probably they will be programmed into your RFID thingy you’ll be wearing.)

You can only have a limited number of passes at a time. You’ll be limited by the wait times until you can get another pass, at least for now.