I am planning a trip for 2020 (it’s a long ways away, I know). Heres my dilemma: I can only go to Walt Disney World in the summer. The only real time we have available is from July 1st – August 9th. Which weather wise is apparently terrible.

So what do I do? Should we go in July? Wait until August? Is there any difference at all? And can someone post something positive about that time of year? I’m getting disheartened lol! Thanks for your help! 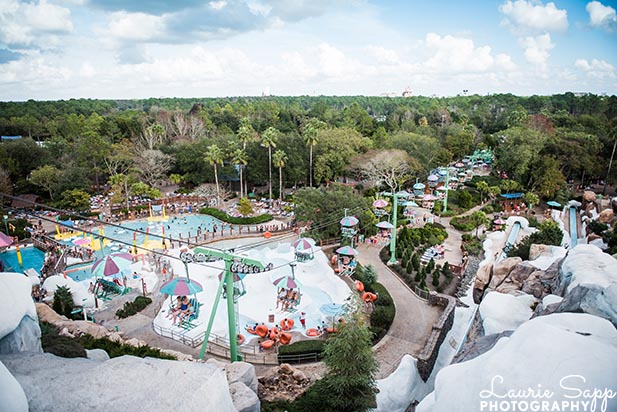 Don’t forget the water parks, Blizzard Beach is so “cool” It has a ski lift (and fake snow) – Photo by Laurie Sapp

I would pull out the Bobby McFerrin (Don’t Worry Be Happy) music, but I don’t think it’s totally appropriate. I think a better song for your question would go back to my childhood about Miss O’Leary and a cow. It said…

“There’s gonna be a hot time in the old town tonight.”

While I’m not sure about terrible weather, it is going to be “HOT! HOT! HOT!” (Oooh, that’s another good song.)

Since you can only go to WDW in the summer and only have July and August, let’s start out by saying there’s not a lot of difference between July and early August. Crowd wise they’re very much the same (late August is a different story.) Weather wise, a little difference but not enough to matter.

So July vs August is a wash.

On the Positive Side 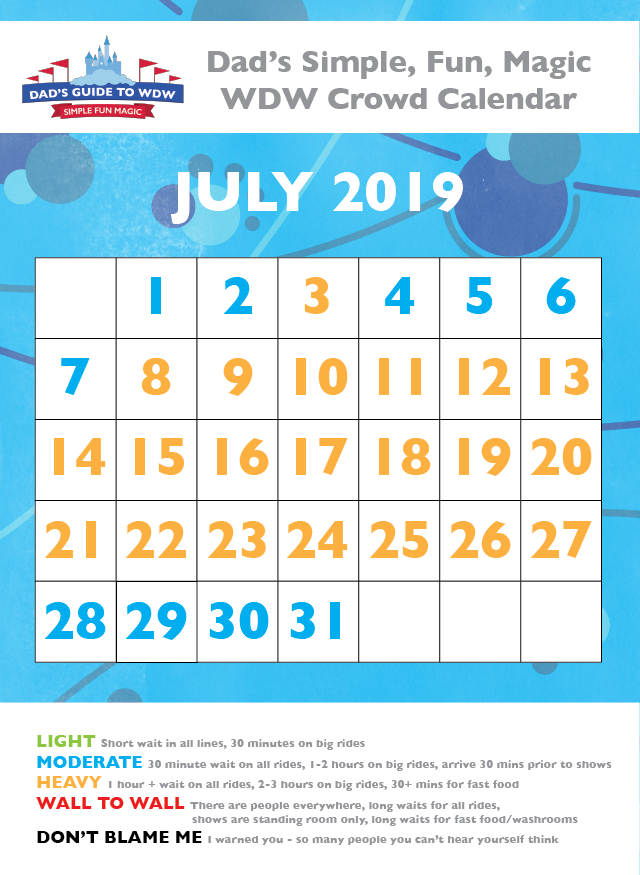 You asked for some positives, OK, here is at least one. Crowds won’t be as big as they used to be. About 3 years ago Disney changed the pricing structure of their tickets it really affected summer crowds. The crowds in July and early August have gone from heavy and crazy (July 4th) to moderate to heavy.

Check out that crowd calendar above. It used to be all red and yellow with the 4th being black. Crazy busy. Like this… 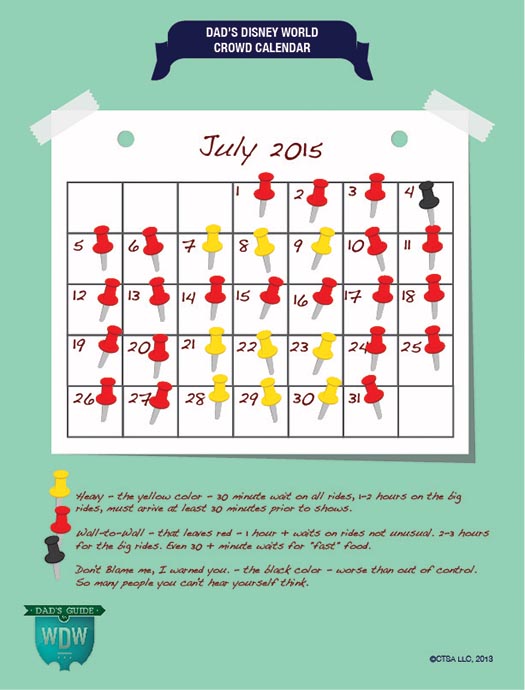 See what I mean. CRAZY difference.

This has really made touring the parks in the summer a whole new experience. Instead of the super long lines and frustrations, it’s now moderately long lines and irritations. Big difference.

Stay out of the heat of the day

While you can’t always avoid it, now that the crowds are smaller and the time standing in line is less, it’s easier to stay out of the heat of the day, out of the afternoon sun. There’s no way to whitewash it. Summer afternoons are brutal. Temperatures reach 95°F (35°C) with 90% humidity. And the sun is BRUTAL.

So, avoid afternoons. Stay out of that brutal sun. Get to the parks early, before they open. Do most of your rides early in the morning, just after noon, when it’s starts to get unbearable head back to the hotel and cool off. Take a dip in the pool. Hit the air conditioning. Take a nap (my favorite).

Come back in the evening when it’s cooled down (it does a little), but mainly you’re out of that BRUTAL sun.

The bottom line, Alex, is that if you can only go to Walt Disney World in the summer it’s doable. Yes, summers are rough. Afternoons are BRUTAL. It’s Hot. It’s Humid. Yes, it Rains a lot (thank goodness, touring after rain can be awesome). But the crowds are manageable and as long as you PLAN for time to cool down in the afternoon, you should be able to have a great time at Walt Disney World.

Positive enough for you?