“Hi Dad, my husband and I are big fans of Mexican food and margaritas. We were told that La Hacienda is a good spot to eat dinner and view Illuminations at EPCOT. I believe Illuminations are at 9:00 p.m. We will be there early December. Do you recommend a 7:30 or 8:00 reservation? Not sure if there is usually a wait to be seated. I don’t want to draw the meal out too long because we have two little ones in tow, but I want to be there in time so we can hopefully get a window seat. Is there an area outside to watch the fireworks in case the kids get too antsy?” 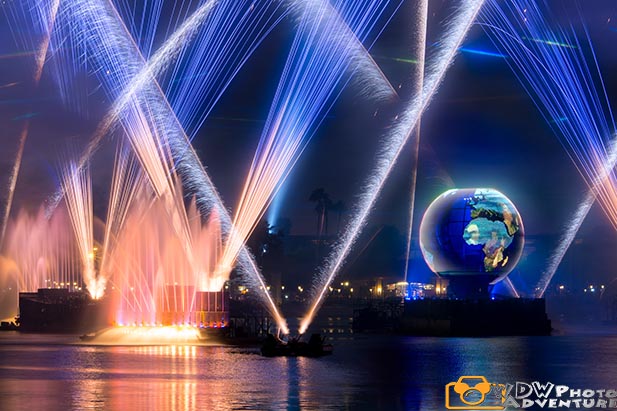 The fireworks at Illuminations are pretty cool – Photo by Wayne Wood

Well, Michelle, congratulations. YOU’RE GOING TO DISNEY WORLD in December. How cool is that?

It may be my favorite fireworks show at Walt Disney World because of the super spectacular ending that lasts seven minutes, with the… “Let there be peace on earth” and all those fireworks going off. It’s just incredible, and that final explosion of fireworks. Wow.

For the last couple of years, I’ve gotten to watch the holiday Illuminations actually from the water view right there and there’s just nothing better, so I like the idea of going somewhere where you can sit on the water and watch the fireworks.

Now, as to timing, with it being at 9:30, that might be kind of late for the kids. I would suggest you make your reservations for 8:45, or something around that time, if you can get them, that way you’re not waiting too long.

I would be a little nervous about taking young kids to a restaurant that late because that’s probably outside of their normal dinnertime. While it sounds like a great idea, it sounds like a lot of fun, I’m not sure it’s the best idea for you.

I would choose 8:45 if I could get it. I wouldn’t go much later than that. 9:00 at the very latest because you might not get seated, especially during the Christmas season.