The Indiana Jones Epic Stunt Spectacular is one of the most complete stunt shows you’ll ever see. In this show you’ll see falls, fights, fires, and stuntmen and stuntwomen throwing punches, doing flips, wrecking cars, shooting guns, running from boulders and much much more.

Something that’s really neat is they give you a “backstage look” at how some of the stunts are done. 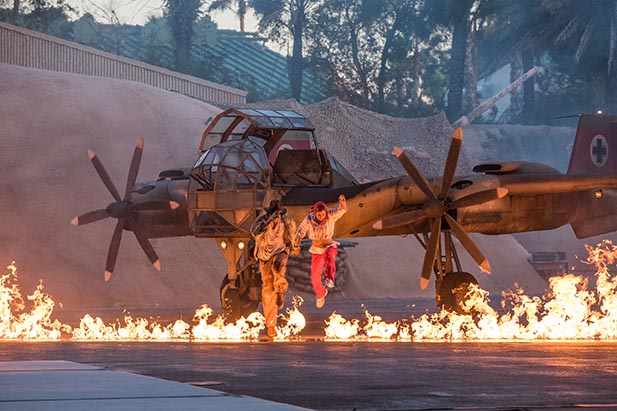 Indy and Marion are literally jumping through fire. Photo by Cliff Wang

It’s non-existant. You get to stand in line until about 20 minutes before show time then you sit down in the staduim and wait for the show. If you’re there during a slower season, just show up 10-15 mins before the show and get a seat without waiting in line.

The show begins with the scene from the first Indiana Jones movie where Indy is trying to replace the statue with a bag of rocks. Indy repels into the shot, he works his way up to the statue through several life threatning situations. He makes the switch and bad things start happening. It all ends when the big ball come rolling down and crushes Indy. (Or so it seems.) The director calls cut and resets the scene.

The stunt man that plays Indiana Jones comes out and explains how the scene works. He talks about how heavy the big ball is, while a tech in the background is easily rolling the ball back up to the starting position.

Over the next 20 minutes or so, several stunts are done including falls, fights, gunfire and big explosions. The whole show is based on scenes from Raiders of the Lost Ark, the first Indiana Jones movie. 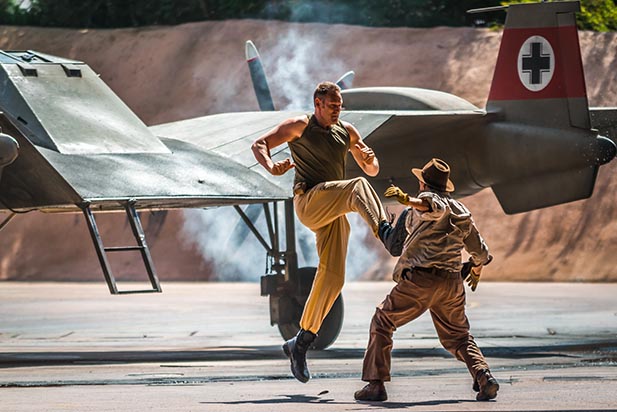 That looks like it hurts! Photo by Laurie Sapp

There is no postshow. You just get up and walk out of the stadium.

Here’s a video from the show.

This attraction first opened in EPCOT in August of 1989. It was the first show anywhere to use a computer based show control system.

The kids sometimes get a little bored with this. It has been a few years since the last Indiana Jones movie, so the kids don’t have an appreciation for the characters. For us old people it brings back some fond memories.