The news is all abuzz with the apocalyptic predictions about Hurricane Irma. Don’t get me wrong this is a very serious situation. For some people it will be catastrophic and that’s not something to take lightly. With that being said, let’s talk about Irma and Walt Disney World. 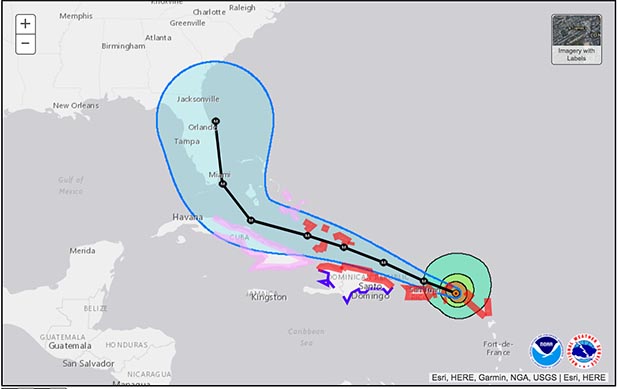 First let’s talk about the likelihood of Irma impacting Walt Disney World. This morning our local weather girl was doing her forecast. Now before you go and say, yeah, Dad a local weather girl, remember, Oklahoma is home to some of the best weather people in the world because of our epic storms.

This weather girl was talking about the latest tracks for Irma. The most historically accurate models are predicting that Irma is going to turn north, miss/skim Florida and hit in the Carolina’s. Some of the other models were showing Irma hitting in south Florida and coming straight up the state.

What happens if Irma turns north? Actually that’s probably the worst scenario. If Irma turns north and hugs the coast like Matthew did last year it has the potential to cause the most damage to Walt Disney World. Matthew closed WDW down for 36 or so hours.

If Irma stays offshore more than 20 miles there will be minimal impact on the Orlando area. Remember Orlando is about 60 miles inland.

OK, so what if Irma hits in south Florida and comes, as I’ve heard it said, “right up the spine of Florida”. Actually that is the best case possible. It’s over 250 miles from Walt Disney World to the south coast of Florida. Let’s say Irma moves fast 20 mph. That means it will take 10 to 11 hours for Irma to travel up the spine.

Hurricanes start dying quickly as they move over land. Land sucks the energy out of them. By the time Irma is 100 miles inland she will no longer be a hurricane. She might pack some rain and winds by Orlando, but the damage potential will be minimal.

A lot can change with Irma over the next few days. The current projections have it around Orlando on Monday. That’s a long time in the life of a hurricane. That gives you a lot of time to prepare.

So what should you do if your trip is planned over the next few days? First stay aware. Keep up with what’s happening with Irma and the projections. They will change (yesterday they were predicting it was going to go west of Florida).

Second, talk to your airline, your travel agent (this is why I recommend Destinations to Travel they do a great job in situations like these) and see how schedules are going to be affected. Check alternatives. Know what you are facing travel wise.

Third, relax. There is no need to start doing the “when in danger, when in doubt, run in circles, scream and shout” thing. That doesn’t help anyone. The old saying let cooler head prevail is a very good one in this situation. Relax. Monitor the situation. Be as prepared as you can.

Disney’s got your back

Oh and last, Disney will take care of you. If Irma hits Walt Disney World, you are in good hands. Yes, it will be inconvenient. Yes, you might miss some time in the parks. Yes, you might even get a little uncomfortable, but Disney is very good about taking the best care possible of guests in these type situations. Oh, and remember, Cast Members live in the Orlando area. Their homes, lives, and families are going through major problems. Be kind to them.