It All Started with a Mouse
By Trent

Do you know the original quote from Walt Disney about it all starting with a mouse? Was it, “It was all started by a mouse” or “It all started with a mouse” or a combination of the two or what? People add what they THINK the quote is to their web pages and then others copy it and paste it to their own. Any help would be greatly appreciated! 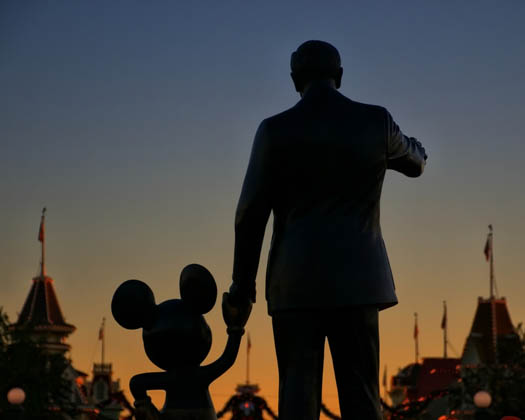 Partners – It all started with a Mouse Photo by Express Monorail

Trent, you’ve touched on one of Dad’s favorite topics – the history of Disney and Uncle Walt himself. You’re right – there is a lot of misinformation and many misplaced quotes out there, but you’ve come to the right place. When it comes to Uncle Walt, Dad is always keen on getting the right information!

The quote you’re asking about is in fact “It was all started by a mouse.” In fact, you can hear Uncle Walt say it himself in this video I found.

Isn’t it neat all the things we can find online today? It’s truly a history buff’s dream!

Dad loves learning about Uncle Walt. In fact, in my humble opinion he was a hero to all men! You can find all kinds of books, e-books, and videos with information about his life, his work, and his passions. The documentary segments on the recent Blu-ray releases of Snow White and the Seven Dwarfs and Pinocchio are really interesting.

But one of Dad’s favorite places to learn about and remember the man who has inspired generations of men, women, and children around the world can be found at Walt Disney World! In 2001, Disney Hollywood Studios opened an attraction in honor of the 100th anniversary of his birth – Walt Disney: one Man’s Dream.

This is a truly remarkable exhibit, tucked away in the Animation Courtyard, not too far from Voyage of the Little Mermaid. There’s never a line to get in, and it’s a great spot to cool down in some air conditioning in the afternoon. But mostly, it’s an amazing collection of artifacts and multimedia which tell the story of Uncle Walt’s life and how his movie studio and theme parks were born.

You can see film footage of interviews with Uncle Walt, including his unveiling of the “Florida Project” – the original code name for Walt Disney World. There is a replica of his office, a desk from his grade-school, and the Academy Award statues from Snow White and the Seven Dwarfs. You can read quotes and facts, and see incredibly detailed models of lands, attractions, and castles from Disney theme parks around the world.

Me, I’m not much of a read everything in a museum kind of person (that’s Mrs. Mom’s job). I’m more of a walk through and look at the pictures kinda guy, but I can spend hours in here reading all about my hero.

Trent, thanks for your question – sometimes we forget about the man and the mouse that started it all, and that’s something important to remember. Learning about Uncle Walt’s roots enhance my experience of Walt Disney World, and I hope it does the same for you!