Nope, I’m dead serious (or not). it’s a small world scares me and it should scare you too. I’ve been researching this ride for years and there’s something seriously wrong with it.

(This is a joke. Don’t take it seriously! It’s pretty funny though.) 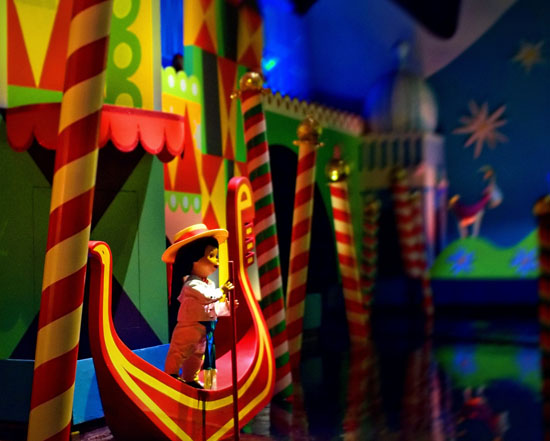 Read this story I found (or made up, I forget which.)

Orlando – Sometimes things aren’t quite what they appear.

For most, the Disney attraction, it’s a small world is an innocuous, innocent, lazy ride that brings up thoughts of world peace and harmony. The only problems come when the ride breaks down, and guests have to abandon the boats and climb out of the ride.

But for some guests, the attraction has a different reputation. Here’s a small example of the comments we’ve found from a lady who only identifies herself as Laurie528.

On my recent trip to disneyworld I decided to go on it’s a small world after all, now, I understand that this is a thrill ride, but I thought it would be easy enough for me to tolerate. Well was I wrong! From the minute I started walking down the ramp I could feel my heart pounding in my chest, but I just gritted my teeth and boarded the boat anyway. As it began to move I ended up having a full blown panic attack. This was the most horrendous ride I had ever been on in my life.(i’m serious, i’m not a thrill seeker) I can’t believe people take small children on this ride. Thoughts just kept racing through my head of being attacked by these dolls, or possibly falling off the boat and being decapitated by the so called track. By the time we reached the tropical scenese I almost fainted. I just could not wait to get off this ride.

There’s the dark side of the ride that’s so secret that Disney denies its existence. – Read the whole quote here.

Our research has uncovered rumors of missing guests, evil dolls, and other unsettling issues. Our repeated attempts to contact Disney for comments have gone unanswered.

The only conclusion is that there is some credence to these rumors. We urge the public to check out Laurie528 and her accusations.

We’re on the trail of something big. It’s about time that someone bring these accusations out in to the open.

This ride is scary.