The Tree of Life is home to It’s Tough to be a Bug, the stinkiest show in all of Disney World. Yes, I said stinky. During the show a stink bug does his stinky thing for everyone to enjoy. (Disney’s got the aroma thing down.)

In 2008, Disney-Pixar released a movie called “A Bugs Life”. This attraction is based on that movie. The show is hosted by a cute little (he’s not very little, he’s actually about 8 feet tall) ant named Flik, and his buddy Hopper who is, strangely enough, a grasshopper.

The Tree of Life Theater presents 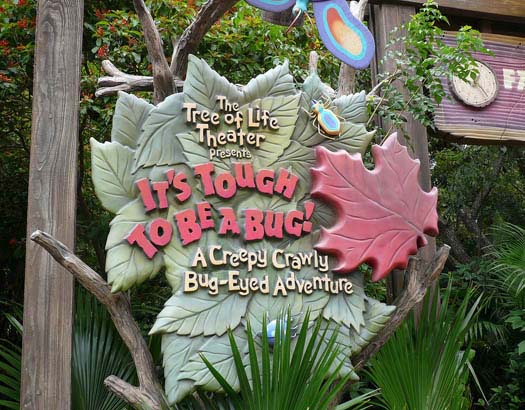 Disney has great preshows, in this one you descend to a big room under the Tree of Life where posters line the wall for some great bug musicals. Before the show starts, there’s the requisite movie that tells you all the rules.

Grab some bug-eyes, so you can be an honorary bug, and take a seat. (That’s what they call the 3-D glasses.)

Find out what it’s like to be a bug. Yuck. This attraction takes you underground to a dark world full of creepy crawling things. Flik and Hopper show you several different types of insects and show you how man is the enemy of the bug community. (Watch out for the stink bug.)

During the show you will experience crawly thing on your legs, smelly things, and even a little tingle. Disney has taken this attraction and made it more than just a 3-D movie. It’s truly interactive and makes use of all the senses.

Climb back out into the light.

It’s Tough to be a Bug first opened at Walt Disney World on April of 1998.

It’s Tough to be a Bug may be Disney’s Best 3D show. (OK, maybe Muppet Vision is better.) The only bad thing is the stink bug. I hate that smell.