This one’s from Lesley. Lesley says, “I’ve been to Disney several times during the summer, but this time we are going the second week of September. I’ve heard that lines are shorter …” yeah, “… but is it possible to get an idea of how much shorter? I know it’s not exact. I’m just excited to go when it might not be so busy. Thanks.” 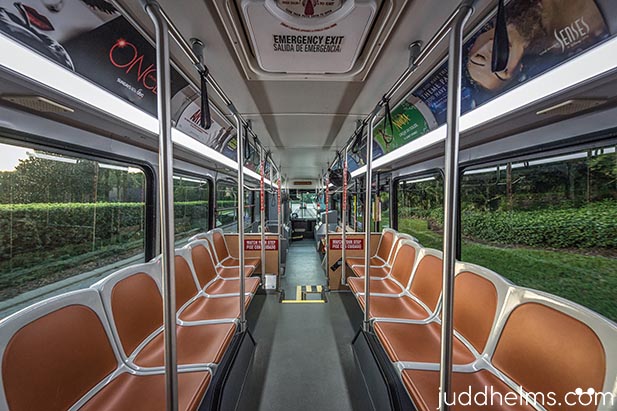 In September the buses are pretty empty – Photo by Judd Helms

Lesley, you are in for a treat! You’re not going to believe the difference between September and July, or summer. It’s just crazy. Let’s just do a comparison. Look at the July Disney World crowd calendars.

August kind of slows down a little bit, early June can be a little different, but for the most part summer is busy. It’s the busiest time of the year at Walt Disney World of a season.

September, just the opposite. Look at the September Disney World crowd pages.

Click on that and look at the September crowds. They’re just nonexistent. You see the greens and the blues, maybe just a titch of orange, but mostly green and blue. Light to moderate crowds all through September.

The Princess, she went to Walt Disney World on her honeymoon, She got married on 9/10/11, so yeah, it was that second week of September. There was nobody there. They didn’t wait in line for any rides. I think the longest they waited was 15 minutes for any ride at the park.

September is a great time to visit Walt Disney World.

Dad’s bottom line, you’re just going to love it. It’s just going to be so peaceful and quiet and gentle. The Food and Wine Festival will be going on at EPCOT. It’s just a really, really nice time to visit. You might never go back in the summer after this one. I hope that helps, Lesley!