“Hello I would like to take my family to MK to see the Christmas decorations, but we are not doing Mickey’s Merry Christmas were just doing a regular park day. Between Nov 10th and December 10th 2018 which is the best time to go with the least crowds? Thank you :)” 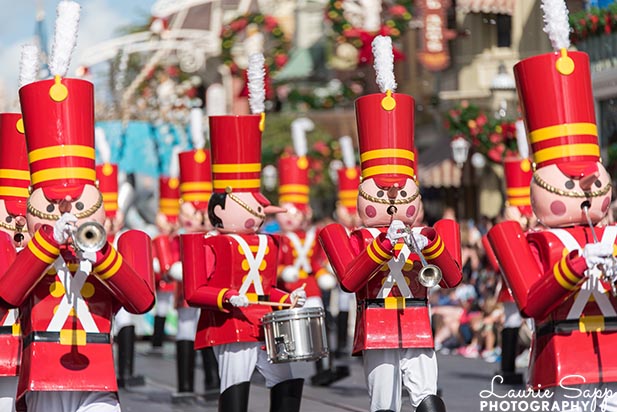 Christmas at WDW is pretty cool – Photo by Laurie Sapp

There is just nothing better than celebrating Christmas at Walt Disney World. It’s, in the immortal words of Andy Williams “The Most Wonderful Time of the Year”.

There’s really not a bad time to go to Disney World during the Christmas season but there are less crowded times.

There are a couple of really nice weeks to go in November. The week of Veterans Day is normally pretty slow crowd wise after the holiday crowds leave. By Wednesday it’s pretty calm.

The only problem with the Veterans Day week is not all of the Christmas decorations are up (hotels) and some of the EPCOT celebrations (Candlelight Processional) don’t start until later in the month.

Another week in November that can be less crowded is the week after Thanksgiving. It’s one of those weeks that can be busy, or slow. My guess is in 2018 it will be pretty much in the middle. I expect moderate crowds that week. (A little busier than I predicted on my crowd calendar.)

In December the crowds pick up a little. The first week of December is the Pop Warner Championships and while it doesn’t have a big effect on the crowds, it does have some.

I like the second week of December myself. It’s been the week our family usually goes during Christmas if we can. It may not be the least crowded week but it’s a good week to visit.

The Christmas crowds start arriving that next week. It’s not terrible the first couple of days. After midweek though it really starts to get crazy.

You get to see all the decorations, shows in December. Christmas is in full swing.

My favorite week during Christmas at Disney World is the second week of December. You get to see everything and the crowds aren’t that bad.