You have May 22-26 as heavy crowds blaming Memorial Day except the holiday weekend is after these dates. Is this a mixup or truth? Just trying to mentally prep myself of going to Disney with a moody teen and 2 preschoolers !! I thought I had chosen a great week between school ending and Memorial Day! 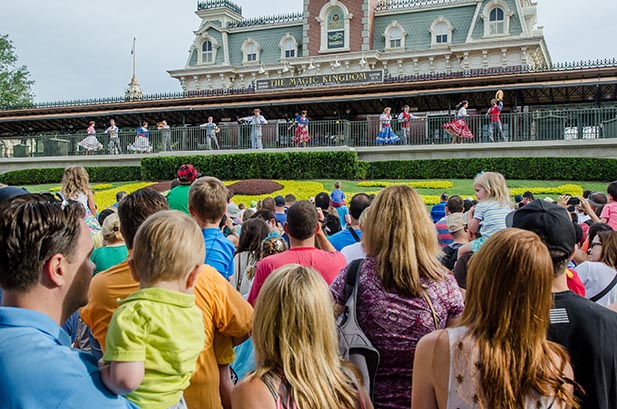 This show always draws a crowd – Photo by Lauire Sapp

Hey Carly, thanks for the question.

It’s a pretty good one. I’m not quite sure where you found me talking about the holiday, the 26th, 25th, any during that time is a holiday. Possibly that came from a previous question I’d answered when Memorial Day hit earlier in the month.

Obviously Memorial Day is later in 2017. But that doesn’t answer your question. Let’s give it a try.

One of the things that has become really hard, especially in May, February, January is predicting crowds at Disney World. It’s always been pretty simple. Crowds follow the pattern. Over the last couple of years, especially 2016, that pattern was really broken by Disney’s promotions. January, February, 2016 were a lot busier than any years before in history.

In 2016, Summer was a lot less busy. May is one of those months where the crowd patterns have changed over the last couple of years. Typically May, all of May was pretty slow. The last couple of years, from about the 15th of May through the end of May, 1st of June, crowds have been way, way up. I mean massive crowds, busy, busy days. That’s why we changed our projections this year.

That’s what you can expect. I think although I know some of the other guys are still predicting lighter crowds in late May, I think Disney has found the recipe for moving crowds from summer into the spring time. I think you will probably see again the crowds being higher in late May. I could be wrong. I’ve Been wrong before. I’ll be wrong again.

Carlye, the bottom line is, I do think that the May pattern of the last couple of years will recur. I think starting in the middle of the month the crowds will start picking up.