Hi, Dad here with another video Ask Dad. I hope you’re enjoying these.

Today’s question comes from Monica in San Antonio. Monica asks, I will be taking my grandson to see Mickey, December 10 through December 18, including Mickey’s Very Merry Christmas party. I would like to make us, my grandson, myself and Mickey matching outfits. Do you know where I will be able to see what Mickey will be wearing this year for Christmas when he is receiving visitors at town hall?

Monica, it’s an interesting question. Kind of a hard question to answer, because we never exactly know what Mickey’s going to be wearing day to day.

Most of the time, he wears one of three basic costumes. Most of the time you see him in the same costume. Will this year at Christmas be a little different? We’re just not sure. As you know, Christmas is my favorite time of year.

It’s the most wonderful time of the year.

See. I told you I could sing. Dad sings good.

If you go to our Christmas at Disney world pages, you can kind of see what Mickey might be wearing during the Christmas time.

There’s a few pictures that you’ll see where you’ll see Mickey dressed up. The URLs are coming up down below, but the first one is Dad’s Guide to Christmas at Disney World.

Now, he won’t be dressed up that way. If you go to the Mickey’s Very Merry Christmas Party page, I’m not going to do the URL. It’s coming up down here.

If you go to the Mickey’s Very Merry Christmas Party page, you’ll see a picture of Mickey on the float where he’s wearing his red outfit, for Christmas, red, green. He’s got the cool white, crème colored pants on, just a beautiful picture.

Now, on a daily basis, at Town Hall, Mickey’s either in his traditional black coat, white shirt and black pants with the yellow buttons, yellow outlined, but you can expect to see when you visit, is this typical Town Hall outfit. It’s black pants, a white shirt with a red vest and a blue tie and a blue cape, a cape that’s blue on the outside and yellow on inside.

We’ll have a picture of it pop up here in a minute. That’s typically what he wears in Town Hall. 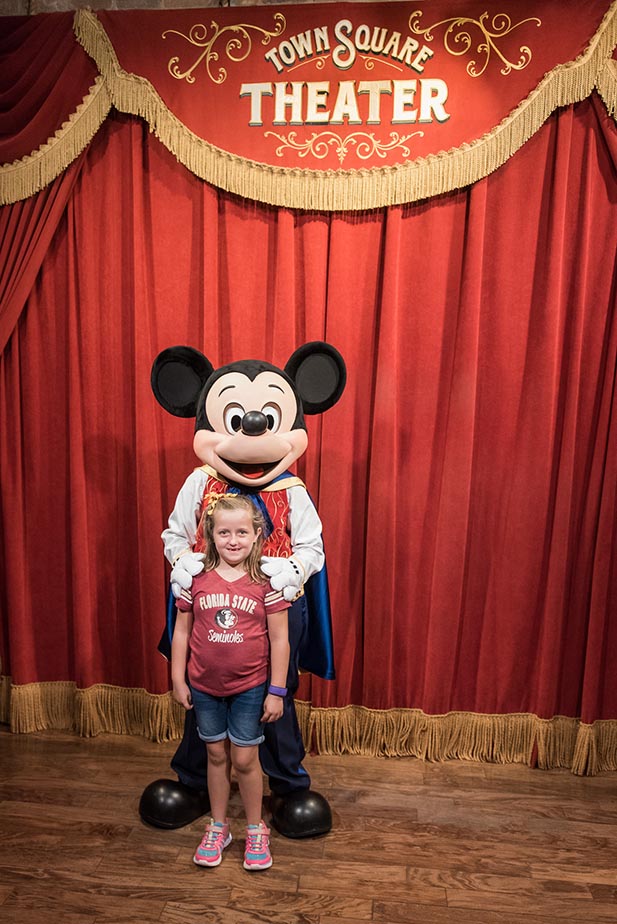 One word of caution for you, Monica, Disney does not allow adults to wear character costumes in the parks. It’s always been in the rules that you couldn’t do that, but early this year, Disney started enforcing that rule. They came out with a big announcement about character costumes and adults.

Anybody over the age of 14 cannot wear a character costume in the park. They’ve had some problems with people dressing up like characters and doing un-Disney things while they’re in the park, so they’ve put a stop to that.

Here we go, Dad’s bottom line, it sounds like a fun idea to dress up as costumes and go see Mickey, look like Mickey, but for adults, it’s just not going to happen.

Your grandson could do it if he’s under 14, that will be fine. You won’t be allowed to do it. I hope you and your grandson have a great trip and thanks for the question. Bye, bye.