Do you want to fly the Millennium Falcon? Don’t answer that, of course you do! Well, here is your opportunity! Now at Millennium Falcon: Smugglers Run, you and five of your closest friends can actually fly Han Solo’s ship in an out of this world adventure. 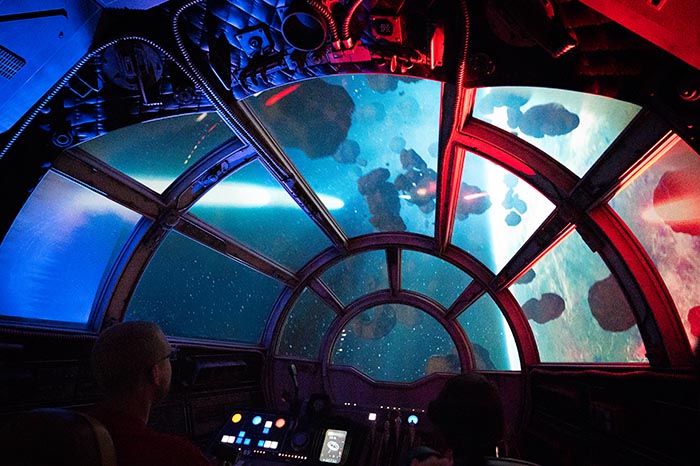 As Han Solo would say, “You’ve never heard of the Millennium Falcon? . . . It’s the ship that did the Kessel run in less than twelve parsecs!”

You don’t want to miss this opportunity! Step into Galaxy’s Edge and hop onboard the Millennium Falcon! You will not regret it. Trust me! 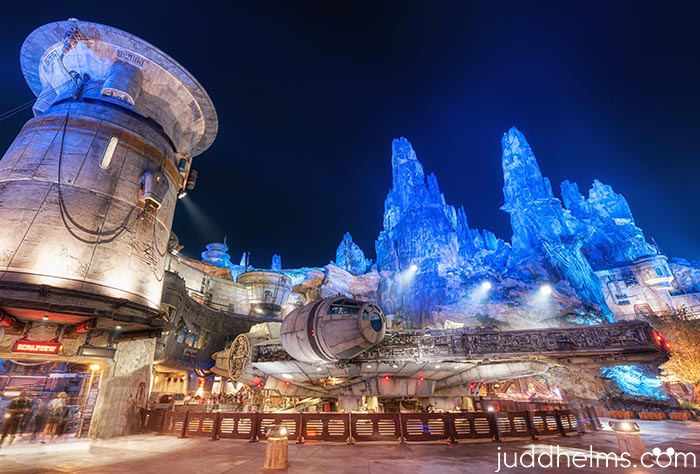 Ever since the news of a Star Wars land at Walt Disney World was first announced, we knew there had to be a Millennium Falcon attraction. This ship is iconic! And the ride is pretty iconic too. You’ll have your own epic Star Wars adventure. 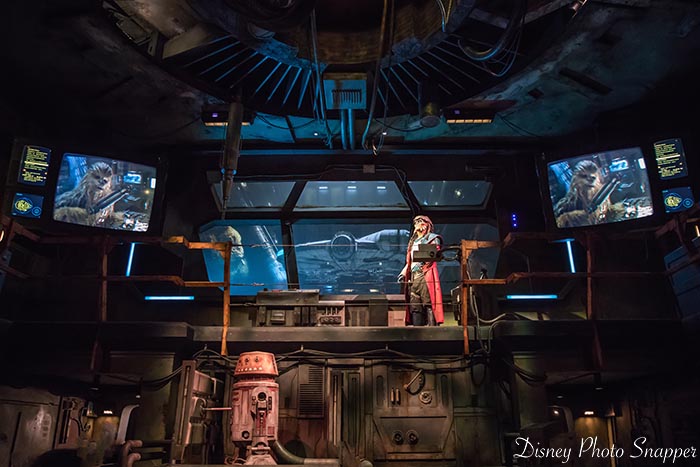 Listen very carefully to Hondo Ohnaka, he’ll tell you what to do – photo by Brett Svenson

You won’t want to miss this queue! You actually get to walk the halls and corridors of the Millennium Falcon! What could be cooler than that?

The queue starts right next to a life size replica of the ship. The Star Wars fans in your group may have a hard time continuing through the line! 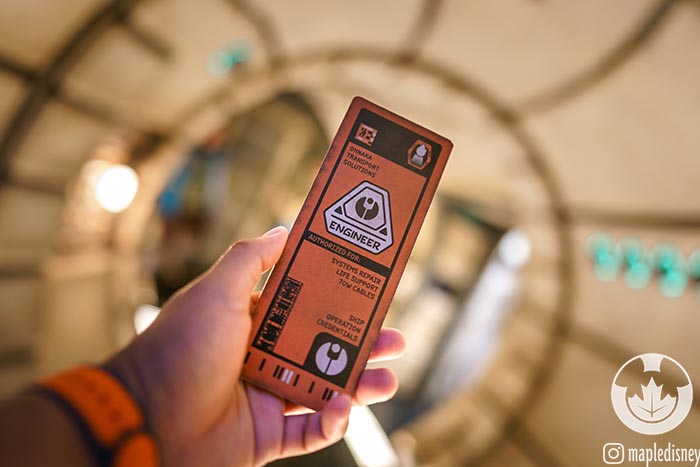 Here’s what the placard looks like – photo by Rich Ramos

You will be given placards to show which position in the ship is yours. There are 3 positions, Pilot (the best), navigator and engineer. Now the Fun starts.

After the preshow, you actually get to walk through the corridors of the Millennium Falcon! Wow! You’ll probably feel the urge to say, “Chewie, we’re home!” Go ahead, Dad (and everyone else that’s ever watched Star Wars) understands!

The next step is to find your seat in the cockpit. The cockpit of the Millennium Falcon! You’ve been waiting for this moment since 1977!

Inside the Millennium Falcon 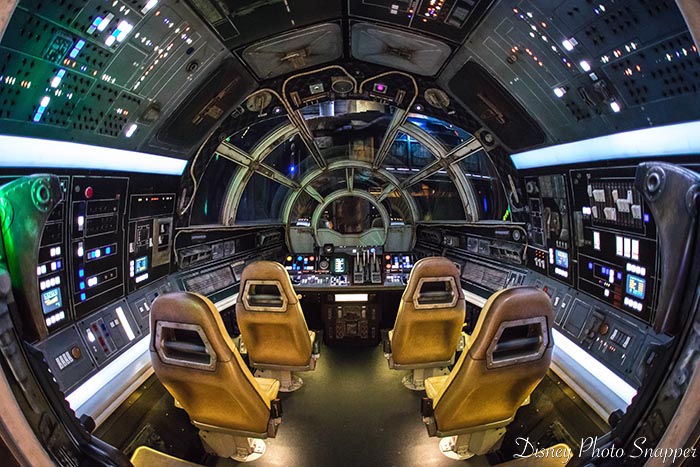 If you’ve been on Star Tours, you know a little of what to expect here. Millennium Falcon: Smuggler’s Run.

This is a simulator type ride, but with an added twist. You are in control. Not like Mission Space, but really in control.

You will be assigned a role. Either pilot, co-pilot, gunner, or engineer. Each role provides a different experience.

How you do with your task will determine how successful your mission will be. You might have to tell your friends to “laugh it up, Fuzzball!” as they hassle you for crashing the Falcon, but you’ll have a great time!

Here’s Dad being the pilot –

That’s what makes Smuggler’s Run so cool! You actually get to fly the Millennium Falcon! I can’t say that enough. Crush gives this ride a rating of “totally kewl . . .” 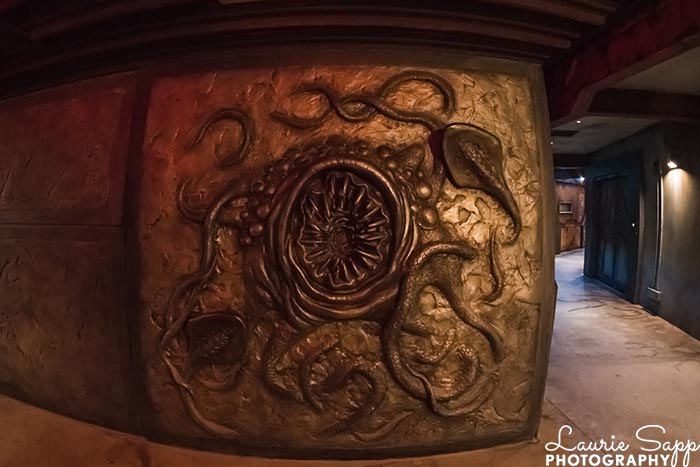 Somewhat surprisingly there is no post show or gift shop to speak of on Millennium Falcon Smugglers Run. But don’t despair, there are plenty of other shops in Galaxy’s Edge and keep your eyes peeled, you never know what you’ll see. 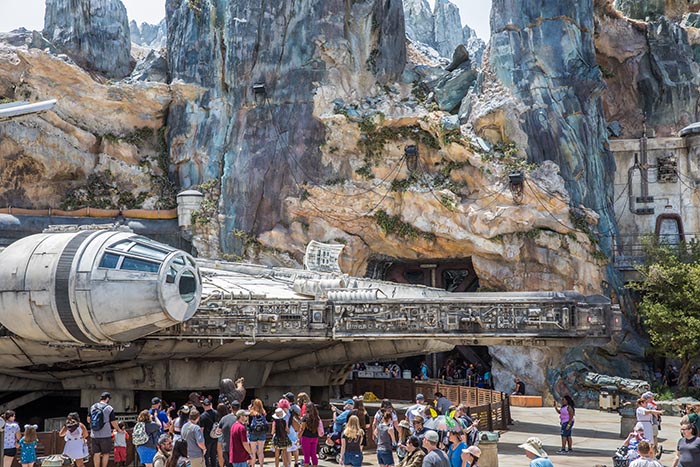 Hollywood Studios has done a great job of managing the crowds and keeping wait times down for this attraction. However queue times can be a bit long depending on the day. OK, maybe more than a big. 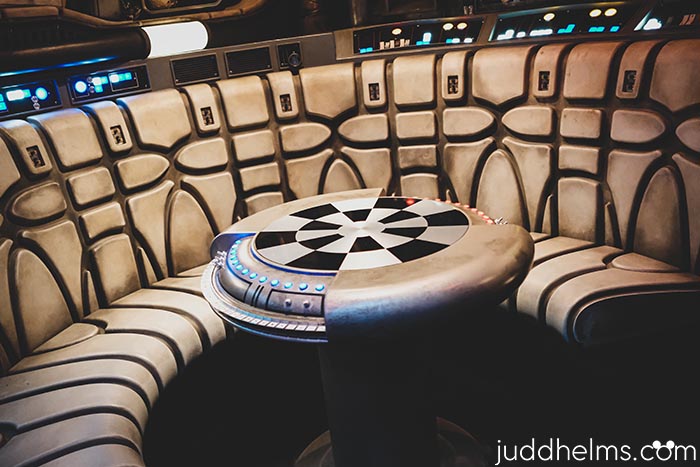 The Dejarik board is cool – photo by Judd Helms

If you want a fun picture opportunity you can sit at the Dejarik board as you walk through the queue. What is Dejarik? It looks a lot like chess. Chewbacca and R2-D2 play it in the very first movie. I’ve wanted to have a Dejarik game since 1977.

This ride offers the same experience whether you are in Walt Disney World or Disneyland! 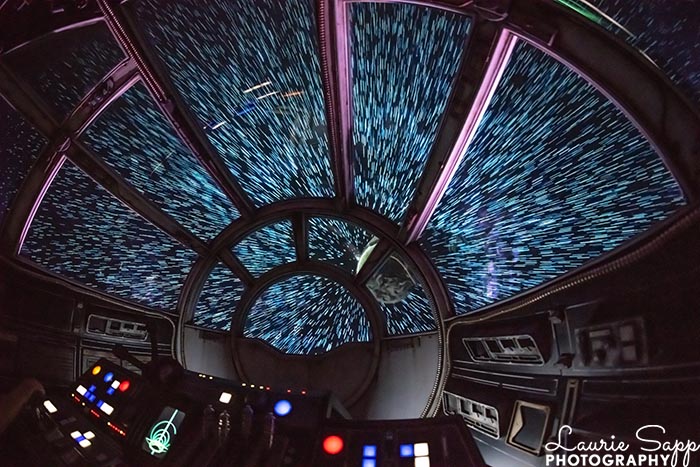 Let’s make the jump to Hyperspace – photo by Laurie Sapp

Star Wars: Smuggler’s Run was announced at the same time Disney made the announcement for Galaxy’s Edge. This happened on August 15th of 2015. Sometimes time flies at light speed! (And sometimes it doesn’t.)

If you easily get motion sickness, you may want to sit this one out. You really feel like you’re flying. It’s not bad if you are a pilot, but if you are either of the other positions, motion sickness can be a problem.

The minimum height to ride is 38 inches.

If you’re the kind of person who loves planning your vacation but just wants to know details about crowds, attractions, and everything Disney, check out our good friends over at Touringplans.com.

You know you want to help pilot the Millennium Falcon and now you finally have your chance. This is a not-to-be-missed type of attraction. There’s so much history of this hunk of junk in the movies and now you can walk in and sit down and experience the flight of a lifetime.