Allen from Zephyrhills, Florida says, “We read your suggestion route for seeing the decorations at all the resorts.”

We put a blog post up a couple weeks ago, had a question about all the resorts. It’s really good. Stephanie put the link down at the bottom.

“We would only like to do the following, Old Key West, Saratoga Springs, Contemporary Polynesian, Grand Floridian, Jamba Lodge. We are vacation club members as well as pass holders, so we are familiar with the park. Can you suggest a good route to take and see these? Thanks, Allen.” 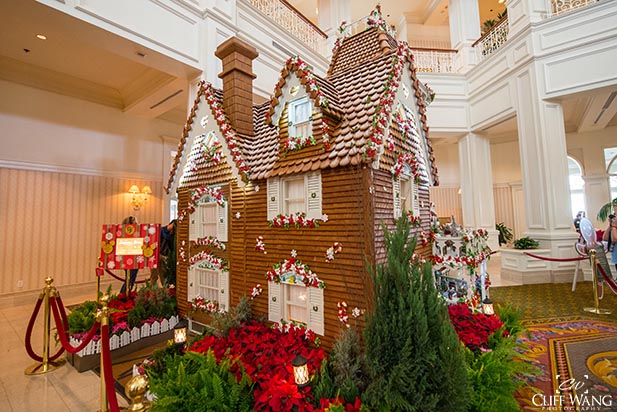 You’ve got to see the gingerbread house in the Grand Floridian, Spectacular! – Photo by Cliff Wang

Allen, like you said, we did that resort crawl for Christmas and it’s just great. It takes all day. If you do it with Disney transportation it takes 14 hours, 15-16 hours. It’s just ridiculous. I assume that you’re going to have your own car since you live pretty close. I assume that you’ll be driving there. It wouldn’t make any sense to fly for you.

The bottom line is it’s going to take some time, but just start at the first place you get to and just make your way around, end up on the monorail and then back to your hotel.