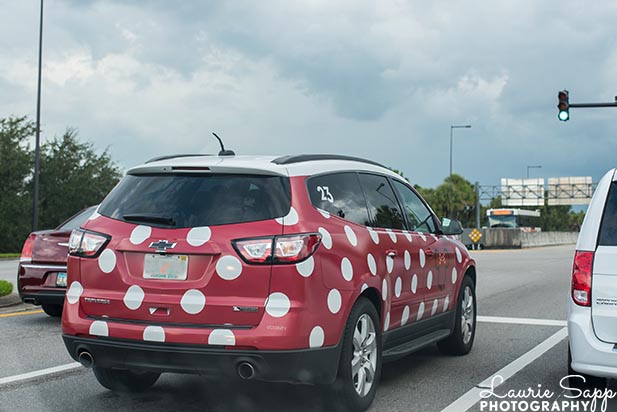 Not quite yet – Photo by Laurie Sapp

Mary, Minnie Vans are not running at the Value Resorts, specifically the Art of Animation, yet. I don’t see that happening before Christmas. I got to say, about your plan to come in and eat at 8:20 on Christmas day at the Grand Floridian, I’d be really nervous about that, especially when arriving at the airport at 5:20.

Let’s answer your question first. Lyft, yes. Uber, yes. Taxis, yes. All of those are available to get you from the Art of Animation to the Grand Floridian. No problem.

About your plan of getting to your dinner reservation. I’m going to start with you. Landing at 5:20. 5:20, you’re going to have to, pick up your luggage, if you’ve got luggage. So now, it’s probably around 6:00 if the airplane’s on time (which on Christmas day is probably a pretty big if). Six o’clock, you’ve got your luggage, and you’re ready to go down a Magical Express or rent a car or whatever you’re going to do to get to Disney World.

If you’re using Magical Express, that takes an hour to two hours, depending on how busy things are. You’re talking about not even getting to Magical Express till at least six o’clock, and then getting on the bus, the bus getting full.

The last time I took Magical Express, this was during kind of a slow time of year. It took almost two hours to get Magical Express to the hotel (Pop Century). The buses will fill quicker during Christmas, but you’re going to find it’s a 35, 40-minute drive from the airport to Disney World. You’ve got another 45 minutes to a minimum of an hour, so now we’re at seven o’clock.

For you, if everything runs on time, you’ll be getting into the Art of Animation about seven. You go to your room, seven o’clock, you might be able to get over to the Grand Floridian by 8:20. That’s if everything goes on schedule. Remember, you’re going to pay $10 a person if you don’t show up.

The bottom line is I don’t think this is a good idea. We don’t make reservations on travel day. We just don’t. We don’t make ADRs unless we’ve got a flight that arrives before noon.

We have done a Merry Christmas Party on arrival day one time, but I usually try not to make reservations on travel day just because things go wrong, especially if I’m getting there that late. I would not make reservations in the evening, arriving after 4:00 PM. I just wouldn’t. Too many things can go wrong. That is a huge travel day into Orlando. Things could easily go wrong, and it’ll cost you $10 a person.