Welcome to the theme park show of the future. (Kinda works with the whole Tomorrowland theme.) Cartoon characters interact with guests live during the show. It’s almost like having a group of live performers

Come help the Monsters of Monstropolis (great imagination Disney) power their city through your laughter. If you don’t laugh loud enough the poor monsters will die. It’s so sad. 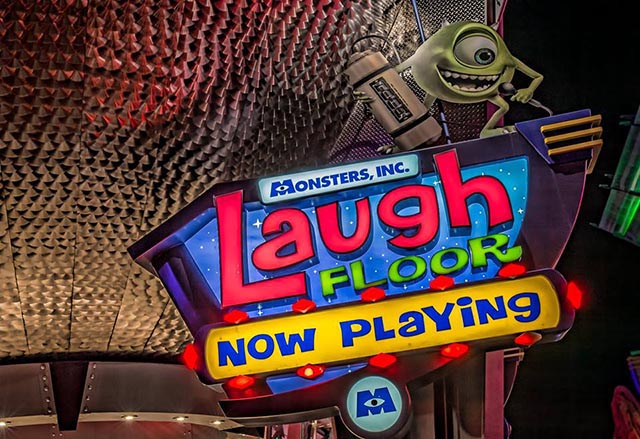 Because the theater seats 400, crowds are not a big factor. You shouldn’t have to wait for more than 2 shows even at the most busy times of the year.

The premise of the show is that when you enter the Laugh Floor you are transported into the monsters world in, of all places, a comedy club. Inside the club there are big machines that collect laughter and convert it into clean safe power for Monstropolis (the monsters home). The more laughter, the more energy accumulates for Monstropolis. Roz, the skeptical manager, keeps thing interesting.

Mike Wazowski (the green eye) is the monster of ceremonies for the short interactive comedy show. He leads the audience through several gags and even tells jokes that have been sent in by the audience. In the preshow area guests are encouraged to send in jokes via text message that can be used in the show.

No two shows are exactly alike.

This attraction first opened at Walt Disney World on April 21, 2007. It’s already on it’s third name. Originally it was called Laugh Floor Comedy Club. During the soft opening the words Comedy Club were added to the end of the title. In March, right before it opened, it was renamed to it’s current name.

This is one of the most interesting new attractions that Disney has opened in a long time. The shows are funny and entertaining. Check it out.