More closures will soon riddle Walt Disney World. Innoventions attrations Sum of All Thrills and StormStruck are set to close on Sept. 14 due to their sponsorship agreements ending. 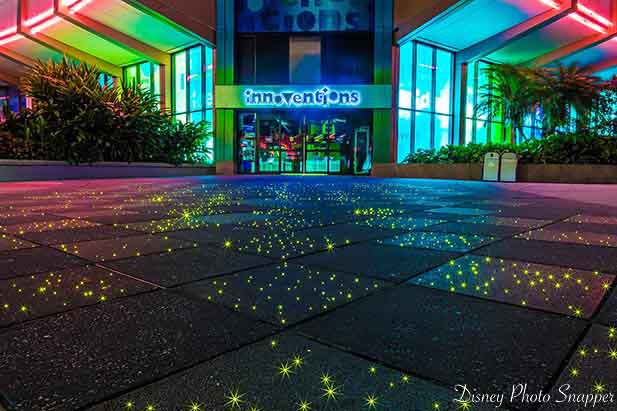 Innoventions sparkles, but maybe not for long – Photo by Disney Photo Snapper

Sum of All Thrills is currently sponsored by Raytheon, a leading company in technology and innovation that specializes in defense, civil government and cybersecurity solutions. According to Disney, Raytheon believes that “tomorrow’s engineers need to be excited by math today,” hence creations like Sum of All Thrills.

The attraction allows guests to design their very own thrill ride that they can make as “mild or wild” as they’d like. After tapping into their math, science and engineering skills, guests are able to experience their design in a 4-D simulator complete with drops and barrel rolls.

Despite it’s low capacity, Sum of All Thrills has stayed relatively popular throughout its run in Innoventions, and has been the main pull to Innoventions East since its opening back in 2009. Unfortunately, that also means longer wait times for a rather small attraction compared to what else EPCOT has to offer.

StormStruck, sponsored by FLASH, or the Federal Alliance of Safe Holmes, a disaster preparedness organization, allows guests to experience a severe storm complete with sideways rain, high-speed winds, and even lightning. The ride is meant to educate guests on proper home installations to withstand such conditions. While the ride may not be considered quite as thrilling as Sum of All Thrills, it is still exciting to watch the shingles being pulled off a roof or a window get blown out.

With both Sum of All Thrills and StormStruck closing, that leaves only one exhibit left in Innoventions East — Colortopia sponsored by Glidden which opened fairly recently in November 2015. However, no one knows what will become of Innoventions East once Glidden’s contract is up.

While no official plans have been announced by Disney some speculate that it will follow in its other half’s footsteps. Innoventions West, which once hosted exhibits like Slap Stick Studios by Velcro and Segway Central, was completely closed in April 2015 and expanded into a new Character Meet and Greet Spot.

Others speculate that the space could be used for festivals and special events—such as the Food and Wine or Flower and Garden festivals — expanding or replacing the Festival Center space in the former the Wonders of Life Pavilion. The Pavilion, previously home to Body Wars and Cranium Command, closed its daily attractions more than a decade ago. Despite the building’s occasional use, it still looks rather sad, inside and out.

With the closing of all but one exhibit in Innoventions East, the transformation of Innoventions West into a Character Spot, the abandonment of the Wonders of Life Pavilion, and the bleak responses to the Imagination! Pavilion since Dreamfinder was replaced with Figment, it looks like EPCOT may be in store for a rather large overhaul.

Perhaps once Disney completes its current major projects in Animal Kingdom and Hollywood Studios—including the Land of Pandora, and Star Wars Land and Toy Story Land—EPCOT will be the next park to get a facelift.

And the rumors don’t stop there. Over in the Magic Kingdom, there’s a rumor that Stitch’s Great Escape could soon be replaced by a new Wreck-It Ralph themed attraction.

And a “leaked” design of a potential new MagicBand model that looks more like a fitness tracker has been making waves on the internet this week. Don’t worry – it took Disney 4 years to come out with the purple MagicBand – if they are going to make a switch it’s not likely to happen any time soon!