Hey Yall! I have more news about the remodeling of Fantasyland. I have found out the Disney Imagineers are building not 1 but 2 brand new castles. These 2 castles come straight out my favorite two Walt Disney Classics. The first of the new castles will be Beast’s Castle and the other will be Prince Eric’s Castle. 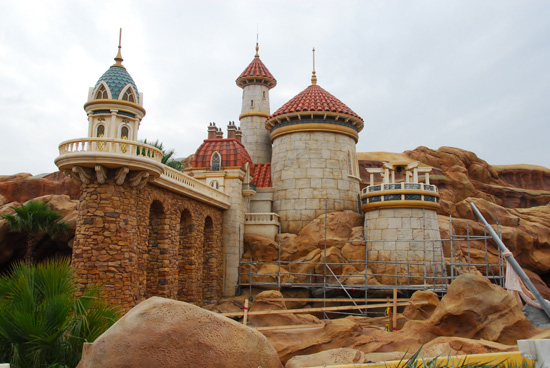 Can’t wait to see how this looks when it’s finished. Photo courtesy of Disney Parks Blog

Beast’s Castle comes from the beloved classic Beauty and the Beast. This castle will feature the “Be Our Guest Restaurant”. This castle is set to open later this year. The restaurant offers a unique dining experience in the ballroom, gallery, or Beast’s illusive west wing. When the remodel to Fantasyland is complete guest will be able to explore the castle, grab a drink at Gaston’s Tavern, shop for Belle inspired items at Bonjour! Village Gifts, and see Maurice’s cottage where Belle grew up.

Prince Eric’s castle will come straight out of the movie The Little Mermaid. This is one of my favorite Walt Disney movies. You can even ask Dad, he will tell you I used to watch the movie all the time and listen to the soundtrack and book on tape I had as often as I could. I was obsessed with it. I dreamed of being a princess and meeting prince charming and going to live in a castle. Well part of the dream has come true. I did find Prince Charming but we don’t have a castle just yet.

Prince Eric’s castle will complete the Under the Sea – Journey of The Little Mermaid attraction the Imagineers are working on. This castle similar to Beast’s castle will use forced perspective to make the castles seem larger than they really are. The forced perspective draws guests’ eyes upwards making the castles appear much larger. The powers that be began using this trick in 1950s at Disneyland and then brought it over when they built Walt Disney World.

These are two castles fit for any princess. This will be a must see for any family traveling to Walt Disney World. Start your little princess’s day off with the Princess Breakfast and makeover then let her explore these two new additions to Fantasyland. Let Dad friends over at Pixie and Pirate Destinations help you make your reservations today.