Do you love collecting Disney merchandise? If so, chances are you might fall in love with two new collector doll sets. 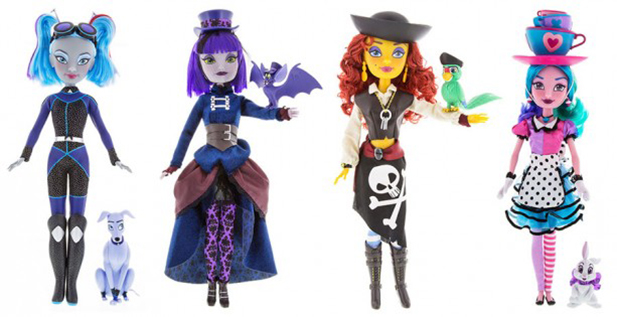 So which one do you want – Photo by Disney Parks Blog

The first set is called “Disney Attractionistas” and they are colorfully fantastic. So far only the first four dolls, which represent Disney attractions, have been released. You can currently purchase Celeste from Space Mountain, Gracey from The Haunted Mansion, Maddie from the Mad Tea Party, and Pearl from Pirates of the Caribbean.

This fall, dolls representing King Arthur Carrousel and Prince Charming Regal Carousel as well as the Jungle Cruise will be released. The 12-inch dolls come with an animal sidekick and include a description of each dolls’ story. The dolls are artistically different and retail for around $30.

Would you like a collectable doll with a realistic rendering to showcase your love of Disney fairytales? Then the newest Disney Fairytale Designer Collection Dolls are for you.

But only if you are a serious collector who wants the entire set-which currently retails for around $650.

Sold as a Limited Edition set of 6000, the collection features the relationship between good and evil represented by five pairs of popular heroes/heroines and their villains. The set includes Snow White and Witch, Ariel and Ursula, Rapunzel and Mother Gothel, Peter Pan and Captain Hook, and Elsa and Hans.

The doll sets are beautifully displayed in a clear box that you won’t need to open in order to admire them. This collectable set will be available this weekend for pre-order at the D23 Expo with a limit of 1 per guest. Although at that price, I’m not sure who will want to order more than 1 anyway.

The Disney Fairytale Designer Collection Dolls are expected to be available by late October. They currently appear on Disneystore.com for preview but are not available for online purchase.

Do you collect Disney dolls? Would either of these sets be the start of a new collection?