“I purchased 2 adult and 2 child tickets back in 2007 and we had 3 days left on each ticket and I paid to make them no expiration tickets. My daughter is now 14 and is going this summer with a friend and I would like to give their family all the tickets for taking her and want to know if they will check ids at the gate.

The tickets are the card tickets that get scanned. I also want to know if it will be a problem for the kids age 13 and 14 to use the child tickets since it was my daughters ticket with no expiration and she was only 4 when I purchased the tickets.” 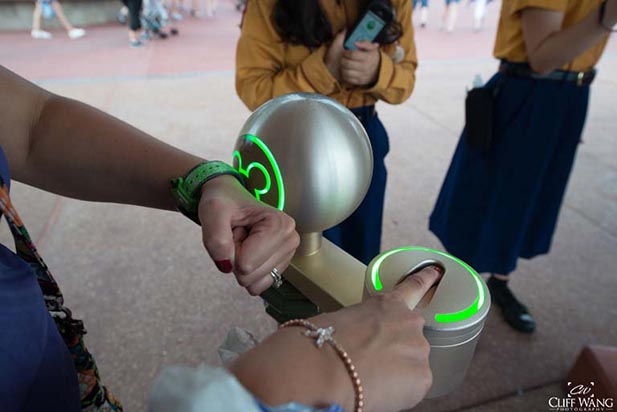 The finger scan thingy is… – Photo by Judd Helms

First the good news, let’s talk about your daughter’s ticket. This is one of those tricky things. You’re daughter grew up. You bought her a child’s ticket and now Disney says she’s an adult.

So what’s the answer. A lot of people will say if their 10 or 11 and don’t look older no one will say anything. However at 14, you probably won’t be able to sneak her through. It’s not a problem though. Since they were a child when the ticket was purchased Disney will exchange it for an adult ticket.

Now for the bad news… Giving those other tickets to the other family, that won’t work. By 2007, Disney was doing the biometric scan, the finger thing, to verify tickets, so the other family would not be able to use your tickets because their fingerprints would match. You don’t want them to be dealing with Disney security because of your tickets.

– Your daughter will be able to use the tickets but your friends won’t. Good news and bad news.