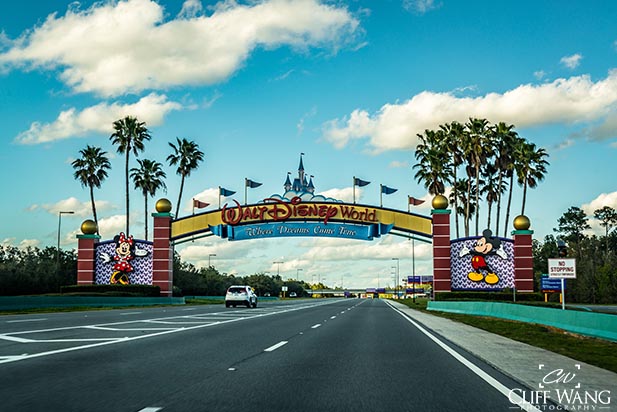 OK, we talked about the worst meal of Palooza 2014 (which really wasn’t bad, it just didn’t live up to expectations). Today we’re going to go to the other end of the spectrum. Today we are going to talk about the, in the immortal words of our Southern Belle, “the Best. Meal. Ever.”

After our Le Cellier disappointment, I think we were all a little leery about eating at Cinderella’s Royal Table, after all it was just 24 hours since I had that horrible smoky chocolate disaster thing. We were all a bit nervous.

In a couple of minutes we were posing for the Royal Family Portrait. It looked pretty good. See … 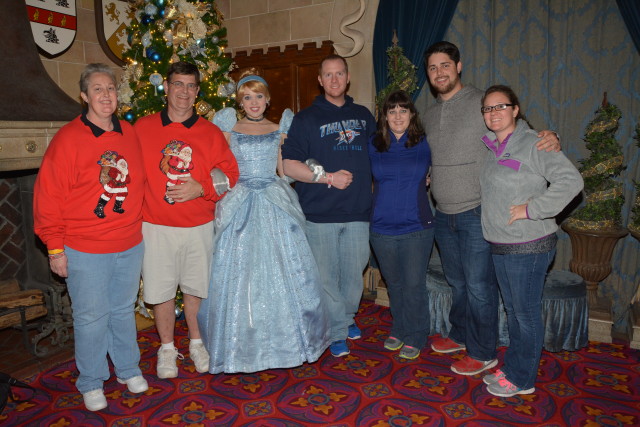 We sat down in the waiting room and waited for our turn to head upstairs. In just a few minutes our party was called and up we went.

We had been here a long time ago when the kids were little, and not married, which seems to go together somehow. The inside of the dining room looked just like I remembered it years ago.

We were seated at a table over by the windows. Not the ones directly by the window, but the next row where we could see right out the window into Fantasyland. In a few minutes our server who’s name was Robert, I think, came over and the fun began.

I mentioned we were all nervous about the service we got the night before at Le Cellier. But Robert put our minds at ease right away. The menus came out and he assured us we did get an appetizer with our dinner tonight. Yeah.

We all ordered appetizers and drinks and away Robert went. When he came back with the drinks the Magic began. Robert asked us if we had gone through the ceremony downstairs? What ceremony? The be a magical prince/princess ceremony. That sounds like fun. We’d love to do that.

Robert started the ceremony. The men were dubbed honorary guards of the castle and the ladies were given magical powers to go with the Magical Wands. Now remember, the youngest person at this table was 25 years old. It was really something special. Us guys all pledged to guard our ladies with our lives.

The appetizers came out and we started to eat. I ordered some salad thing and even though it was a bit fancier than I’m used to I ate it all up. It was really tasty. Yes, I ordered a salad got to watch this girlish figure of mine.

Now, we were all ready to order our entrees. I loved the idea of the Pork Tenderloin, but it came with a lot of green stuff that I just knew I wouldn’t eat. Listen to this from the Disney website – Truffle-Farro Risotto, Brussels Sprouts, Root Vegetables. Nope, that’s not a list of stuff any Midwestern Farm Grown boy would order.  The accompaniments that came with the steak looked lots better – Heirloom Tomatoes, Gouda Mashed Potatoes, Roasted Carrots, and Caramelized Onions. I like tomatoes, potatoes, carrots and onions. I’m not sure about Truffle-Farro Risotto, and I’m sure I don’t like Brussels Sprout and root vegetables.

So I asked Robert if I could have the potatoes and carrots that came on the steak and put it with the pork tenderloin. That’s when the funniest thing ever happened. Robert broke out in song and sang the music out of the old Burger King commercial, “hold the pickles, hold the lettuce, special orders don’t upset us”. OK, maybe that was just in my head. He actually just said, OK, we can do that.

After the appetizers had been there for a minute Robert showed back up with a second round of drinks (promising start, ours weren’t even empty yet). That’s when he asked if we had gotten our Wishing Stars yet?

Can you say great fun. Magical meal? Yep this was going great and my tea glass hadn’t even gotten close to being empty.

In a few minutes the food arrived. It looked awesome. My plate had Mashed Potatoes, Roasted Carrots, Caramelized Onions, and 2 beautiful looking pieces of Pork Tenderloin. Everyone’s plate was properly put in front of them. No asking what you ordered. Proper service. Lumiere would be proud.

The entrees were yummy. Every plate was completely clean. I was trying to pick mine up and lick the juices, but Mrs. Mom stopped me. I have to say it was the best Pork Loin I ever remember tasting. I’d eat that meal any day.

About that time the Princesses started showing up. Now we didn’t really want to make any fusses with the Princesses. Our table was all adults and we are all grown up and out of the Princess phase. That was until Jasmine showed up. The Man-Child has been “in love” with Jasmine since he was a little bitty boy. He was about 4 when Aladdin came out. Very impressionable age. When we brought him to WDW the first time (he was almost 5) he got his first view of Jasmine and he was totally in love.

So when the Princesses started making the rounds, it was no big deal. Our Princess, because she is a Princess had to have her picture made with each one, but when Jasmine came around there was no stopping the Man-Child. He was jumping out of his chair to have his picture taken with her. It was almost embarrassing. His wife just laughed and snapped about a hundred pictures. I think there’s a little blackmail in his future.

While we were winding down, the kids started talking about the day and the meal. Our Southern Belle (the Man-Child’s wife) is a bit of a romantic. She was in heaven. Dining in a Castle with real Princesses and swords and magic wands. Suddenly the Man-Child piped up that the only way to make this the “Best. Meal. Ever.” is if she had Dragon Tail to eat.