For years this Frontierland restaurant was the home of the “Mile Long Fixin’s Bar”, which was a good reason to eat here. There used to be cheese, grilled onions, and all kinds of fixin’s for hamburgers. You could make a killer sandwich by adding anything you heart desired.

Today the fixin’s bar is smaller, but you still get to fix your own sandwich. The way you like it. 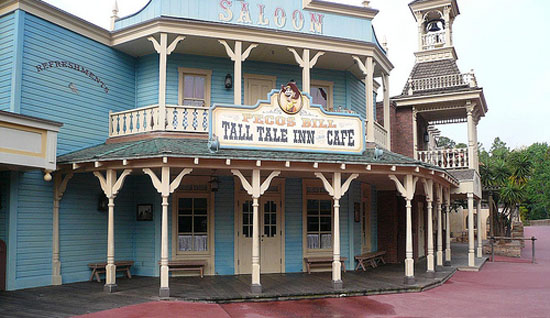 Pecos Bill Tall Tale Inn and Cafe is located in Frontierland (naturally) down the way past the arcade and the Country Bear Jamboree. It’s almost to Splash Mountain. Where else would it be?

The menu is basic fast food. Lunch is served starting at 10:30. Service ends depending on the Magic Kingdom closing times.

Tables are hard to come by during normal meal times.

A couple of years ago Disney got on a wheat bun kick. I don’t know what genius in Anehiem thinks that hamburgers and hot dogs taste better on a wheat bun, but they are just stu … (better not say that) let’s just say, they aren’t very smart. If god meant for hamburgers and hot dogs to be served on wheat buns, then bread would be made out of wheat. (Who’s not so smart now?) I know. But you get what I mean.

The last time we ate at Pecos Bill they had wheat buns. Yuck.

Pecos Bill is the home of the standard hamburger and french fry meal. That’s OK. It’s a staple of the American diet. However there are lots of good places to eat all around the Magic Kingdom. Find your favorite at …

For the last several years, Disney has been standardizing menus at counter service restaurants. This restaurant has suffered from the standardization. Yes, the cheese may be gone off the fixin’s bar, but you can still make a mean burger here. (Love those mushrooms and onions.) And now that the white bread buns are back, this place is fit to eat at again.