Peter Pan’s Flight is one of Uncle Walt’s great enduring masterpieces. This Fantasyland classic take you on a trip back in time.

Guests climb into magical vehicles that once sprinkled with pixie dust take off and take riders through the sights of London. Eventually you end up in Neverland with the Lost Boys. You even get to see Peter Pan face off against the evil Captain Hook. 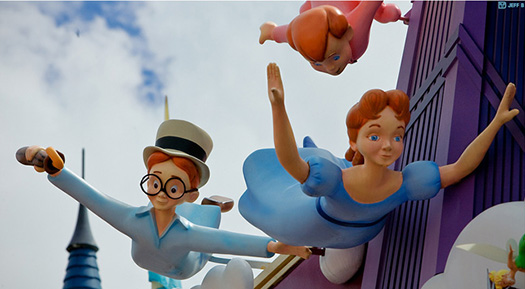 You can fly, you can fly, you can fly. We all remember those words from the classic movie Peter Pan. With this attraction guest can actually fly. After walking through beautiful painted scenes hanging in the walk way guest get on a moving platform and then aboard a magical boat that flies with the help of pixie dust and your off on Peter Pan’s Flight.

This ride is very simple, maybe the simplest of all rides at Disney World, but is still one of the most popular. There are no fancy high tech animatronics and many of the effects on the ride come from the glow in the dark paint along the walls. As guest aboard ships they are taken off to a magical world flying over many different scenes from the movie during Peter Pan’s Flight.

Peter Pan’s Flight has long lines all day. Why? I don’t know. Probably, because it’s a silly little kids ride that parents still love taking the kids on.