What is the best plan for first time to Mickey’s Very Merry Christmas Party without kids?

That’s a pretty good question. Let me see. I got to find my notes here. That’s an interesting question. Planning for Mickey’s Very Merry Christmas Party is something that I just frankly never done. We’ve gone to the parties four or five times. We just don’t make a plan for the parties. I don’t think it’s all that necessary, but if you need to make a plan, here’s what I would suggest. It depends first time to be there, you want to take everything in. 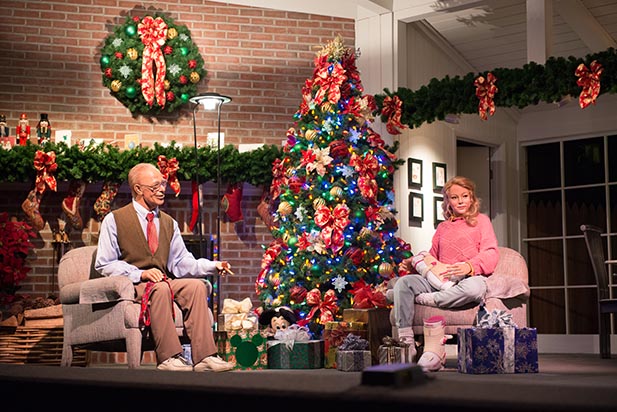 Never a line for the Carousel of Progress, even during Christmas – Photo by Cliff Wang

You’ve got snow coming down on Main Street. You’ve got all of the decorations. In fact, there’s brand new snacks at the different locations this year. Each land has a snack area, and there’s new snacks at each of the lands. We talked about that last week, the new snacks. Last weeks Lunch with Dad

If you do Buzz at seven, by the time you get over to Pirates of the Caribbean, 7:45, 8:00, there won’t be any line at all. You’ll walk right on. Anything else you want to do there, pick a spot, you want to be, and you want to see the parades at 9:30, fireworks at 10. Find you a spot where you’re going to be able to see those things.

Another thing I would do as soon as I got there is to check out the schedule for all the entertainment. There’s great shows going on in the castle, back on the stage in Tomorrowland, all over the park. There are great little Christmas shows that you can see, especially after dark. They’re really, really cool.

I just map those out and see what you wanted to do, hit the rides you want to hit. I’d save the big Seven Dwarfs Mine Train and any of the roller coasters for later in the evening. As the evening goes on, the lines get shorter because during the parade, you’re there as adults. With kids, kids get tired. The younger kids are going to be there for the parade. They might stay for the fireworks, and then they’re leaving. There’s a big mass of people that will leave the parties after the parades and the fireworks. The later in the night you can stay, the shorter the lines on the big rides get.

We’ve been on Space Mountain at the end of a party towards midnight and walked right on. Literally, five people in front of us.

Just pick out your favorites. Make you a plan which favorites. Don’t get real detailed. There’s always things going on. You never know when something’s going to pop up, something you need to see. That’s what I would say. You can make a plan, make an outline, don’t get real detailed, don’t sweat it. Just relax. It’s Simple. You’re at Disney World!!! It’ll be Fun. It’ll be Magical. Don’t worry about it. Don’t sweat it. Just go, have a great time, and enjoy the beauty of Christmas at Disney World.

All right. That’s it. Bottom line, Dad’s bottom line, is just to go, make an outline, have a little plan, enjoy yourself. Enjoy yourself. Catch some of the shows, the snacks. You’ll be fine.