Today, January 5, 2020, Disney posted Pop Century Bus changes for the Skyliner. MMmmm… Starting today, only one bus per hour will run from the Pop Century to EPCOT and Disney’s Hollywood Studios? What? Who came up with this idea? Let’s talk… 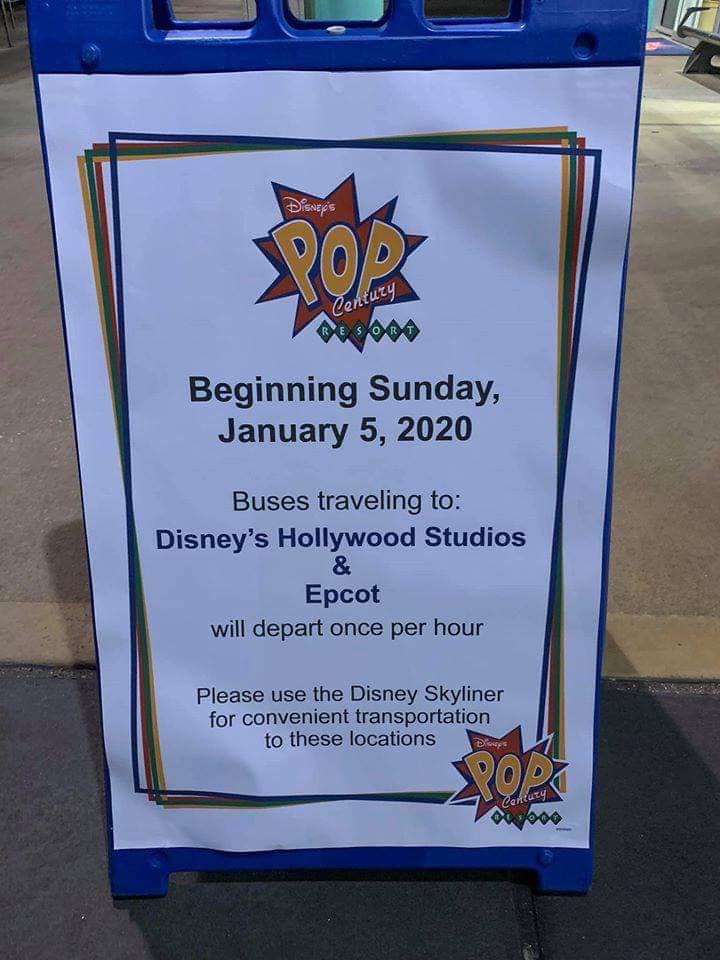 One per Hour? That’s NUTS! – photo Courtesy of Duane Smith

OK, now before we go saying things we might regret or that gets us in trouble, let’s step back and take a deep breath.

HEY DISNEY, WHAT IDIOT CAME UP WITH THIS IDEA?

This is a TEST

That’s not a great response, but I just had to get it off my chest. After a couple of seconds of thought, it dawned on me that this is probably just a test. January 5th is the start of a slower time of year. Temperatures are comfortable so it’s not a terrible time for a test.

Disney does these things all the time. They don’t actually announce a policy change, they just throw up a sign that can be taken down at any time. If the policy works, then they announce it as a permanent change.

Changing the Pop Century buses for the Skyliner makes a lot of sense. The Skyliner makes getting to EPCOT and Disney’s Hollywood Studios very easy and quick. There’s almost never a line or a wait at the Skyliner. It’s only a 11 minute trip to the Studios from the Pop and 18 minutes to EPCOT which is a little quicker than the bus. (That counts from the time the bus/Skyliner door closes.)

Disney poured a lot of money into the Skyliner and they want people to use it and a lot of people are. The more people riding the Slyliner, the less people waiting for buses. Less people waiting for buses means less buses are needed. Less buses needed means less buses come to the Pop. Which means longer waits for the buses which sends more people to the Skyliner. That leads to a change in the bus schedule because of the Skyliner. It’s a viscous circle.

I know a lot of you have the same kind of reaction to this Pop Century Bus change as I did. That’s OK privately. But if you want to respond to Disney there is a better way than yelling with words like idiot, stupid, etc. That won’t do a lot of good.

The most likely way to get Disney’s attention is to respond firmly, directly, but respectfully. Remember, someone who had no input or even knows about this policy is going to be the first one to read this. What they do with your response is going to depend on their initial reaction. If you insult their mother, they are not going to respond well. If you speak clearly, state your objection, thank them for their time, etc. they will be much more likely to forward your response up the food chain.

Disney watches Social Media very closely. If you were to post something to Facebook, Twitter, Instagram, Pinterest or any other Social Media, be creative, funny, but, again, respectful. Be sure to include the hashtags #disney, #disneyparks, #popcentury, #disneyworld or such. Disney monitors hashtags, using them will make it more likely that someone from Disney will actually read them.

Yes, this Pop Century bus schedule change because of the Skyliner is annoying. It’s a little scary. Hopefully it’s temporary. But it is understandable. Riding the Skyliner is “cool” (not temperature wise, but Fonzie wise). It’s faster than the buses. Disney spent a ton of money on it, so it makes total sense.

There’s a good chance that this is just a test, so be patient, but this is the time to make your opinion known.