“Is every room at the Pop Century getting refurbished, renovated, in 2017? We are going to the Pop Century the week after Thanksgiving, and we’re wondering if perhaps we could score a new room.” 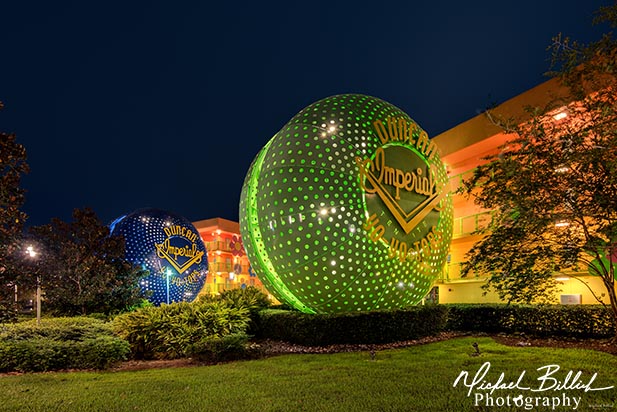 Don’t you just love the Pop? – Photo by Mike Billick

Julianne, yes, every room at the Pop Century is getting refurbished. Disney does this to all the hotels. Every few years, they go through, they tear out all the carpet, they tear down. They redo the whole room, wallpaper, beds. Everything gets replaced. It’s just the process you have to do at a hotel to keep them updated. The Pop Century is going through theirs.

It’s not something that you’re going to notice if you’re at the hotel. It’s not anything to worry about. They close off sections at a time. They work between 9:00 and 6:00, so they’re not making noise at night. They’re only doing it during the day. You probably won’t even notice it. None of the main buildings having any refurbishment, so it’s all in the guest rooms. All of the rooms are getting refurbished. They started at one end, and they’re working towards the other.

They started at one end. They’re moving towards the other end. They started this month. It’s going through like next May, so about Thanksgiving, they’ll be about halfway done. There’s a 50-50 or better chance that even without doing anything, you will get one of those newly refurbished rooms. You might not have to do anything, and you’d be in a refurbished room. It’s a pretty good chance by Thanksgiving.

Now, there is a way that you can kind of guarantee it, but have a better chance, if you request one of those rooms. They’re doing sections at a time. Let’s say they started in the 80’s and 90’s section and moved south, started up by the Art of Animation. That’s where they were staging. That’s where they were putting all the stuff for the construction. Let’s say they did that, they moved south. You request the 80’s section, you’re going to get one of those rooms, because those rooms are going to be done.

How do you do that? When you make your reservation, you can put that request in there. Or, my suggestion would be to get in touch with our partners at Destinations to Travel, and let them do it for you. Have them book your trip. They can make requests. They’ve even got access to a tool where they can make … I’m pretty sure that you’ll get the room requested. It doesn’t always work, but it works most of the time.

Go to our Destinations to Travel page. Fill out the form, get started, and when you talk to your agent, tell them you want to get one of those newly refurbished rooms, and they’ll figure out how to do that for you. Their service is free. It doesn’t cost anything. They do a great job. They take great care of you.

Dad’s bottom line is, there’s a better than 50-50 chance that you’ll get a refurbished room. You can request to get one of those rooms and make the chance even better. Every room’s getting refreshed. It’s a good thing. It’s going to be cool.