The dates for the 2013 Pop Warner Championships have just been announced. They will be on December 6 through 13. 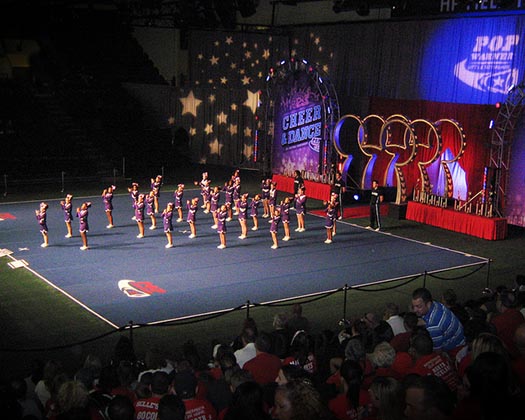 The Cheer and Dance Championships

During the Pop Warner Cheer and Dance Championships, 300 squads compete. The HP Field House at ESPN Wide World of Sports Complex is the home for this event.

The Divisions – Dance and Cheer

There are four different age groups that teams can enter. There are also different divisions for different sized squads. Divisions are also divided by competition categories.

First coaches will need to check the guidelines for the size group of their squad.  During the Pop Warner Cheer and Dance Championships there are 3 divisions: small, medium, and large.

After that has been decided then it is time to look at the age of the team. There are four age ranges at Pop Warner Cheer and Dance Championships: Jr. Pee Wee, Pee Wee, Jr. Midget, and  Midget. (You might think they would come up with nicer names.)

Then from there decided what level of competition the team is at. There are 4 different levels to choose from: YCASA-PW-1, PW-2, PW-3, PW-4.

Each year the every Pop Warner team dreams of winning the Pop Warner Super Bowl. The whole year of competition leads up to the big event which is held at the Wide World of Sports Complex at Walt Disney World.

Sixty-four teams qualify for the big event. They all come to Orlando in search of the biggest thrill of their lives (and I’m not talking about a ride on Rock ‘n’ Roller Coaster.

The 64 teams are divided into 2 divisions and the broken down into 4 separate categories depending on age and weight.

Before making it to the Pop Warner Super Bowl teams must win League and Regional Championships. Each team is guaranteed two games at the Super Bowl. The winning teams in each division are named the Tomlin and Warner Champions.

There will be time to practice and have fun with visiting Walt Disney World for the Pop Warner Cheer and Dance competition.

Each team will have a designated practice time. There are also times set aside for Study Hall for all of the athletes.

You can buy Daily Admission Tickets for $16 a day for guests 10 & up. Guests ages 3-9 will be admitted for $11. Another option is to get a Length-Of- Event Admission. This is $48 for guests over the age of 10 and $33 for those 3-9. These tickets are available for purchase online or at the ESPN Wide World of Sports Complex. You could always let your friendly travel agent help you in booking these.

The Pop Warner Championships brings thousands of kids to Walt Disney World. Teams are housed in the All Star Resorts and one of the Moderates (it rotates from year to year). So it will be hard to get a room at any of the Value Resorts the week of the Championships. Also, Disney excludes this week from any discounts.

The Pop Warner Championships are lots of fun and excitement for lots of kids. Football and Cheerleaders, what could be more American?