When you think of a Star Wars ride, what would you want in it? How about Rey, Finn, Po, Kylo, Hux, BB-8, a space battle, Storm Troopers, excitement, scares, destruction, escape, and of course, the good guys win. It’s all there.

Star Wars: Rise of the Resistance 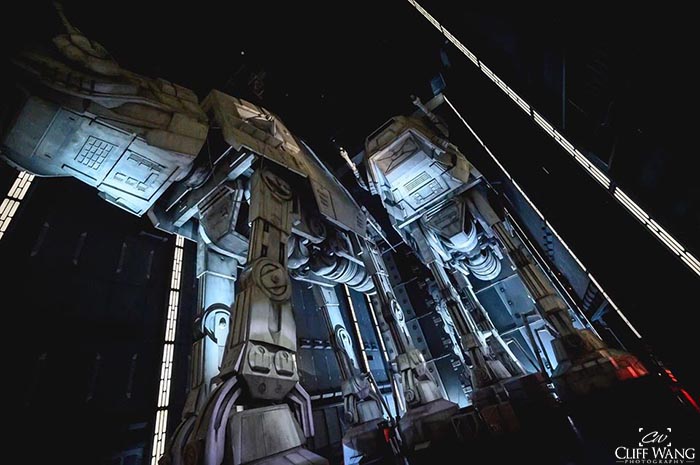 Where have I seen those? – photo by Cliff Wang

In fact, it’s not just one ride, but two, plus a short show to get things started. 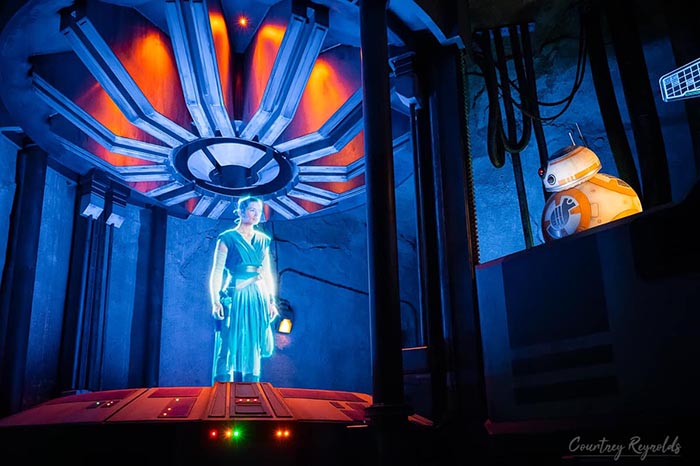 Rise of the Resistance starts with you and about 20 of your closest friends gather in a chamber in the middle of Batuu and are assigned a secret mission by Rey who appears in the coolest hologram display ever seen outside of a movie. BB-8 rolls around and makes the appropriate beeps. Poe, Finn, and the whole gang are all set to help with this mission.

I did the ride twice and I don’t remember what the mission was, but that’s not the point. You are a Resistance spy on a secret mission. 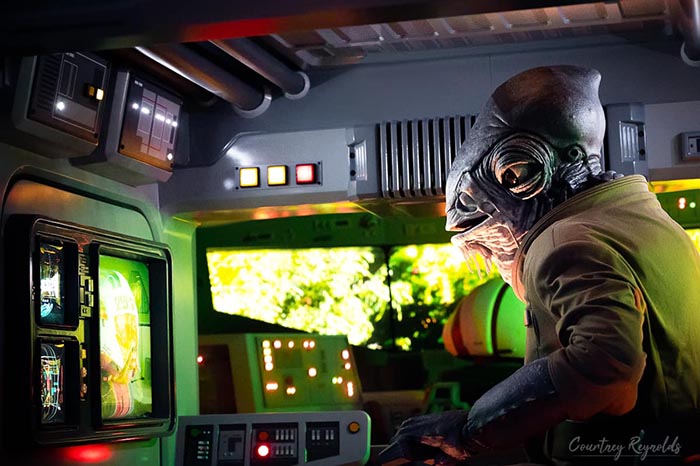 Getting the transport ready for takeoff – photo by Courtney Reynolds

Your mission starts when you walk by Poe’s X-Wing to board a transport ship to start your mission. Once everyone boards, the transport takes off and you’re on the way. Poe and his fighters are escorting you. What could possibly go wrong?

Of course, everything does.

You watch the takeoff from Batuu. You start to jump to lightspeed when a Star Destroyer shows up and the transport ship starts taking a beating. After a few minutes of trying to escape. you get tractor-beamed into the hanger of a Star Destroyer. 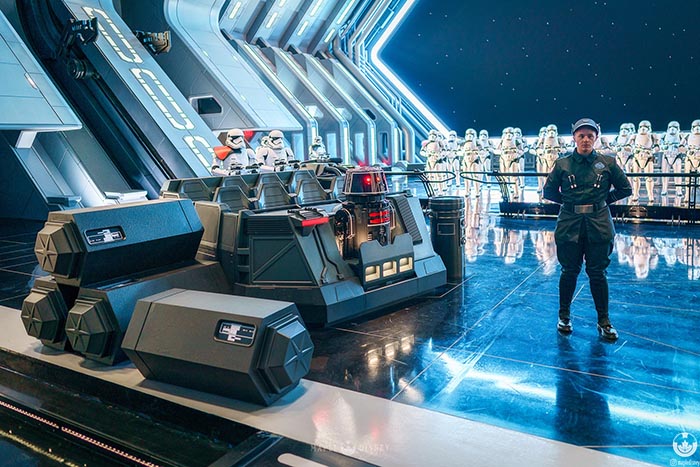 This room is just eerie – photo by Rich Ramos

The bulk of the attraction takes place inside of a Star Destroyer. The transport ship docks on the deck of the Destroyer where you are taken prisoner by the First Order. You step off the transport into a hanger with rows and rows of nervous Storm Troopers watching your every move.

Then you are marched into the detention block where you are put in a cell to await your interrogation. Kylo Ren and General Hux show up and your interrogation starts. After a few minutes you are loaded on a transport where you will be taken for questioning by Kylo Ren himself.

I don’t want to ruin the rest for you, but let’s just say mayhem ensues and it involves Finn in Storm Trooper gear.

It all ends with you escaping and the Star Destroyer blowing up. The good guys win.

PS. If you just watched Star Wars: The Rise of Skywalker you’ll feel something is eerily familiar. 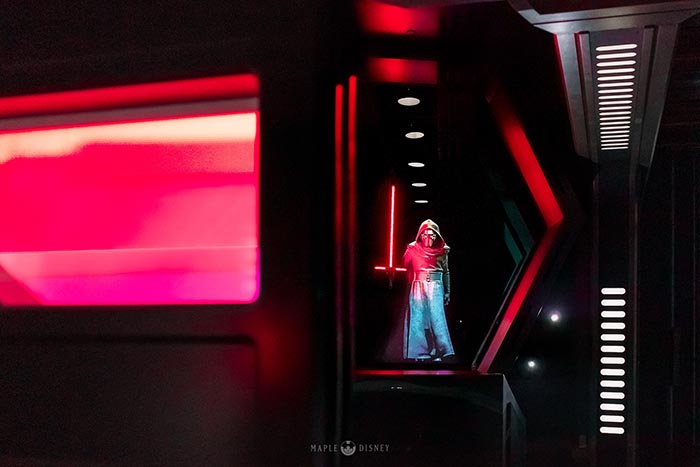 Can you escape from Kylo Ren? Only the Force knows – photo by Rich Ramos

Like Millennium Falcon: Smuggler’s Run, there really isn’t a post show. You get off the ship and walk back into Batuu. No gift shop. 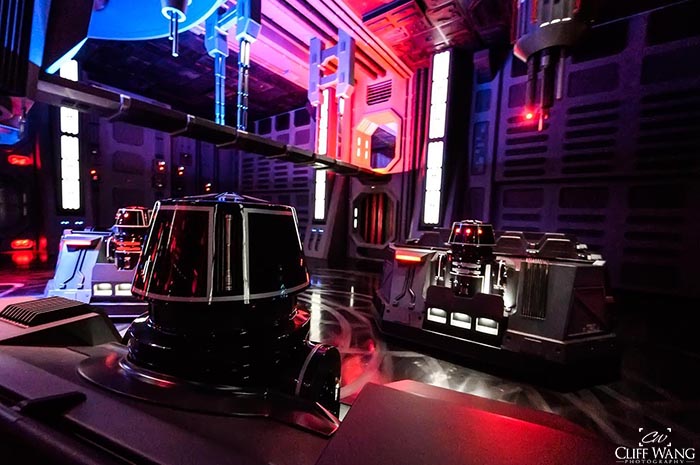 The trackless vehicles are really interesting – photo by Cliff Wang

FastPass+ is not available for Rise of the Resistance and won’t be any time soon. Currently Disney is employing a crowd control tactic called Boarding Groups. Everyone who rides the ride during the day must have a Boarding Group.

Boarding Groups are a special form of FastPass, but you can’t make reservations in advance.

Once Disney’s Hollywood Studios officially opens (Extra Magic Hours don’t count), you open your My Disney Experience app and right on top there is a button for joining a Boarding Group. If the button is grayed out, all the Boarding Groups are gone for the day. Push the button and get started. If you are traveling with a group make sure they are all in your friends and family before getting to the park. Everyone in the group has to be ticket scanned into the park.

When it comes time for your Boarding Group you will get a message from the app and have 2 hours to present yourself at the ride to board. There are times when the ride breaks down and not all the Boarding Groups get called. If that happens Disney will work to get you on RoR the next day.

Disney controls the lines with Boarding Groups so crowds and lines aren’t bad unless the ride breaks down (which it does a lot). If there weren’t any Boarding Groups lines would be epic. This is not a ride that takes a lot of people per hour.

NOTE: Since Rise of the Resistance opened on December 5th (it’s late January when I write this), Disney’s Hollywood Studios has opened at 7 am or earlier every day and is scheduled to open before the normal 9 am until March 1st. Disney has changed hours a at Hollywood Studios several times since the ride opened. There is a HUGE crush to get into the park when it first opens, typically around 6:30. Everyone wants to a Boarding Group number.

Here are some Fun Facts about Rise of the Resistance:

Star Wars: Rise of the Resistance opened in Galaxy’s Edge at Disney’s Hollywood Studios on December 5th, 2019. It opened at Disneyland on January 17th.

Here are the restrictions for RoR from Disney’s Website:

WARNING! For safety, you should be in good health and free from high blood pressure, heart, back or neck problems, motion sickness, or other conditions that could be aggravated by this adventure. Expectant mothers should not ride.

*I suffer from pretty bad motion sickness and had no problems at all on Rise of the Resistance. It’s pretty gentle for a thrill ride.

Rise of the Resistance is located in the front part of Star Wars: Galaxy’s Edge of if you prefer, Star Wars Land at Disney’s Hollywood Studios. It’s pretty much the first thing you come to after the entrance. It’s on the right. There isn’t a lot of signage so you might have to ask someone.

Rise of the Resistance is my new favorite ride at Walt Disney World. I mean that. I loved it. Millennium Falcon: Smuggler’s Run is AWESOME, but this is a whole new level. EIGHTEEN minutes of INCREDIBLE.