Uncle Walt grew up in the Mark Twain/Tom Sawyer America we’ve all dreamed about. He was a Missouri boy who was home around the water. He loved watching the old Paddleboats run up and down the Mississippi River.

Liberty Square is home to the Liberty Belle. It’s Uncle Walt’s recreation of the old paddleboats of his youth. The only difference is this one is on a rail and goes round in circles. 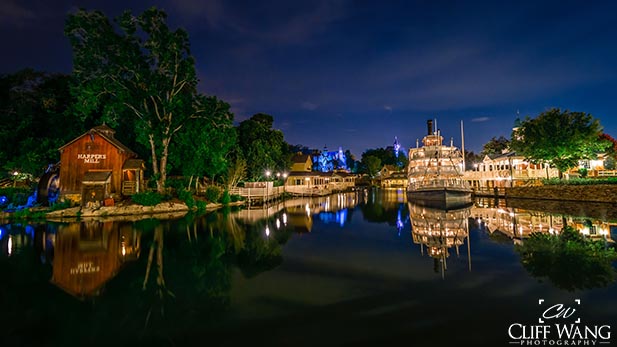 The Liberty Belle is a three story paddlewheel steamboat. Recorded narration plays as you pass your way around Tom Sawyer Island. The massive paddlewheel actually provides the power for the boat (Dad used to think there were outboard engines hidden under the boat. Silly Dad.)

The Riverboat is a authentic replica of boats that steamed up and down the Mississippi around the turn of the century.

The Rivers of America

The Rivers of America is the body of water that the Liberty Belle floats on. It runs through Adventureland. As you make the 17 minute journey around Tom Sawyer Island, you’ll see Splash Mountain and Big Thunder Mountain Railroad.

There are scenes along the riverside of Native American Villagers, woodland cabins and even a hint of trouble ahead.

This attraction is actually named the Liberty Square Riverboat. But the boat is named Liberty Belle. Yeah, I know it’s a little confusing.

The Liberty Belle is a beautiful turn of the century paddleboat. The ride around the Rivers of America is full of interesting scenery. Be adventurous, it’s not a 3 hour tour, it’s just a 17 minute voyage around Tom Sawyer Island.