“Hi Dad, we visited Animal Kingdom a few months ago, in March. Rivers of Light was only showing on selected days and we missed it. We plan to visit Walt Disney World again in March 2018, is Rivers of Light expected to run nightly during early March?” 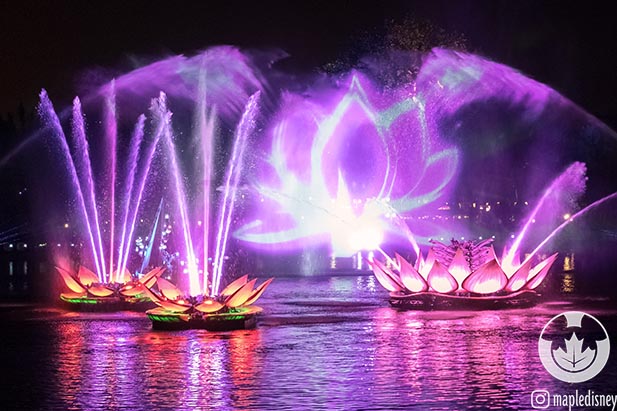 Lindsay, that’s one of those questions that I’m gonna give you my best guess, because it’s Disney, and what they’re doing with Rivers of Light, nobody has a clue. They’ve been putting out the show times for Rivers of Light in three month increments, three to four months ahead of time.

Right now they’re showing Rivers of Light on Sunday, Tuesday, Thursday, Saturday, that pattern, and they’re doing that pattern, even through the week of Thanksgiving, up through the end of November; that’s how long the schedule is out.

I’d like to see what December’s schedule says before I really commit to anything for March, but my best guess is, March 2018, especially early March before the real big spring break crowds start hitting, my best guess is it will be Sunday, Tuesday, Thursday, Saturday. So I would probably try to plan my trip around that, to where you’re gonna be in Animal Kingdom on Sunday, Tuesday, Thursday or Saturday if you want to see Rivers of Light.

Now, is it possible that they’ll go to every day? You know, Hollywood Studios went through this same thing with Fantasmic!. Fantasmic!, for years, was just … you had to figure out which day it was gonna be on show, and then finally, a few years ago, it went to every day. Will that happen with Rivers of Light? I don’t know. I suspect it might, because they’re really trying to push Animal Kingdom into a full day into the night park, and for some reason they are … I don’t know. It’s just a Disney thing, we don’t know.

My best guess is, and what I would suggest is, plan your trip to where you’re there on Sunday, Tuesday, Thursday, or Saturday, and you’ll have a good chance of seeing .